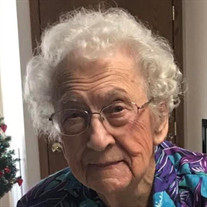 Zoe M. Petersen, age 98, of Storm Lake, Iowa died Friday, May 14, 2021 at Methodist Manor Retirement Community in Storm Lake. Memorial services will take place Tuesday, May 18, 2021 at 11:00 a.m. at the Fratzke & Jensen Funeral Home in Storm Lake. Masks and social distancing will be encouraged. Burial will be in the Buena Vista Memorial Park Cemetery in Storm Lake. Visitation will take place one hour prior to the service at the funeral home. The Fratzke & Jensen Funeral Home in Storm Lake is in charge of the arrangements. She was born January 31, 1923, in Lehigh, Iowa, daughter of Lawrence Calvin and Ada (Hoshaw) Eslick. She lived on the family farm along the Des Moines River. After country school, she passed a test qualifying for high school in Webster City. Zoe and her cousin Edith roomed together in Webster City to attend school. In 1940, Zoe graduated from Webster City, Iowa, high school and came to Buena Vista College and roomed with her brother Paul. She received normal training and taught country school. While at college she met her future husband, Bob. They were married June 29, 1943. While he served in the 101st Airborne in Europe, she and her brother worked at the Glenn L. Martin Aircraft Factory in Omaha, Nebraska. After the war they settled and taught in Palmer, Iowa before coming to Storm Lake. Zoe also worked as a secretary for the AEA and later as a library assistant at the Junior High School in Storm Lake. To say she was a world traveler is probably an understatement. Zoe and Bob had started to travel in the years before his passing. Velda Robinson and Zoe saw the world together. She had walked on the Great Wall of China. She had seen the Taj Mahal in India. She gazed upon Mt. Everest in Nepal. She had booked passage through the Panama Canal. She had cruised the Mediterranean and inland passage of Alaska. She was in Iceland when the tragedy of 9/11 happened and was delayed in returning to America. She visited the “Lost City of the Incas” of Machu Picchu in Peru. One entire trip was to Turkey. She traveled to Australia and New Zealand and claimed she would have moved there if she were younger. Russia, Thailand, Japan, Hawaii, South Korea, Brazil were also included in her travels. Mom was one of the first women to gamble at a casino in Kathmandu, Nepal, while countless men stared and were appalled to see these brazen women. She chewed cacao leaves on the train leaving Machu Picchu to relieve altitude sickness on the way to La Paz, Bolivia. Mom illegally exchanged American dollars on the black market in Gorky Park in Moscow because she could get a better exchange rate. She enjoyed spending time with family. She liked to go antiquing. She taught chair caning for Community Education. She was a Cub Scout leader. She enjoyed watching Hawkeye basketball. She enjoyed being “Mrs. Fixit” at the Buena Vista County Historical Society. Mom liked going “shopping” at WinnaVegas, Wild Rose or the Argosy Riverboat. She loved playing bingo Wednesday afternoons at Otsego Place. The highlight of her days was watching the birds and squirrels at her window feeder while sharing cups of coffee and conversations in the morning with Dave and Dana. In addition to her parents, Zoe was preceded in death by her husband Bob, infant daughter Lynn Kristin, sisters Ruth (Calvin) Chalfant and Beverly (Joe) Bria, brothers Paul Eslick and Verne Eslick; sister-in-law Yvonne (Ray) Bertness Zoe is survived by two children: David (Audrey) Petersen, Dana Petersen (Julie Hoft), two grandchildren, Kris (Kyle) Hartje and Jackie Petersen-Blake, two great-grandchildren Madeline and Clara Blake; and numerous nephews and nieces.

The family of Zoe Petersen created this Life Tributes page to make it easy to share your memories.

Send flowers to the Petersen family.