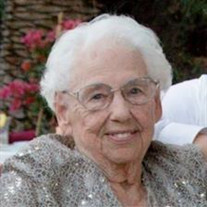 Zelda Lucille (Gutz) Morse, age 94, passed away peacefully Tuesday, November 5, 2019 in Tucson, Arizona. Memorial services will be held on Saturday, December 7, 2019 at 11:00 a.m. at the Fratzke & Jensen Funeral Home in Storm Lake. Burial will be in the Buena Vista Memorial Park Cemetery in Storm Lake. Visitation will take place one hour prior to the service at the funeral home. The Fratzke & Jensen Funeral Home in Storm Lake is in charge of the arrangements. Zelda was born on April 22, 1925 to Theodore and Louise (Ripke) Gutz. She grew up with two brothers and five sisters in Buena Vista County, Iowa, where her fondest childhood memory was riding a horse and buggy to school in the snow. At just eight years old, she met the love of her life, Norton Morse. He won her heart by simply offering her a stick of gum. They were married ten years later, on June 27, 1943, shortly before Norton shipped out to join the war in the United States Army. Together, they raised eight sons on a farm in Storm Lake, Iowa. Zelda was no stranger to hard work and often took care of the many responsibilities of farm life, while managing a household and caring for her children. Cooking, sewing, and gardening were just a few of Zelda’s hobbies. What seemed a simple chore, became an act of love, because she did it from the heart. After 53 years of marriage, she and Norton parted ways when the Lord called him home in August 1996. During her remaining 23 years, Zelda continued to embrace life. She traveled to Europe, cruised the Mexican Riviera, drove herself around the country, and made several cross- country trips in an 18-wheeler. She was well-cared for by her children and always surrounded by family. Zelda was a loving, faithful wife and devoted mother. She cherished nothing more than her family and was beyond proud of her children, many grandchildren, great grandchildren, and great-great grandchildren. She leaves behind her sons Randall and wife, Donna, Harlan and wife, Ruth, Darrell, Duane, Dennis and wife, Joyce, Lyle and wife, Jane, Larry and wife, Jean, and Steve and wife, Linda. Also surviving, are sisters, Julie and Lenore. Upon her passing, Zelda was reunited with her husband, mother and father, infant grandson, sisters, Pauline, Victoria, and Vera, brothers, Gerhardt and Norman, and daughter-in- law, Susan.

The family of Zelda Morse created this Life Tributes page to make it easy to share your memories.

Send flowers to the Morse family.