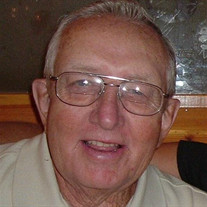 William "Bill" O'Meara, age 91, of Storm Lake, Iowa died on Friday, March 15, 2019 at the Methodist Manor Retirement Community in Storm Lake. Funeral Mass will be held on Wednesday, March 20, 2019 at 10:30 a.m. at the St. Mary's Catholic Church in Storm Lake. Burial will be in the St. Mary's Catholic Cemetery in Storm Lake. Visitation will take place on Tuesday, March 19, 2019 from 5:00-7:00 p.m. with a vigil at 6:30 p.m. and a rosary to follow all at the Fratzke & Jensen Funeral Home in STORM LAKE. The Fratzke & Jensen Funeral Home in Storm Lake is in charge of the arrangements. William Lewis O’Meara, the son of William and Viola (Schuelke) O’Meara, was born on March 1, 1928 in Galva, Iowa. In his youth, Bill was baptized and confirmed at Our Lady of Good Counsel Catholic Church in Holstein. Bill attended grade school and high school in Galva graduating in 1945. Right after high school, Bill enlisted in the Navy to serve his country. He was stationed in Hawaii for two years and then in the reserves for four years. On February 3, 1951, Bill was united in marriage to Beverly Daugaard in Holstein. The couple was blessed with four children: Debra, Connie, Teresa, and Mary. His Catholic faith was central in his life, and an inspiration to his family and friends. He was a member of the Knights of Columbus and served as a eucharistic minister. He worked for 20 years for Hygrade and later IBP/Tyson. Other jobs throughout the years included postmaster, delivering milk for a creamery in Holstein, insurance salesman, and he published the Galva Shopper. He worked until he was 89 years old weighing trucks at Tyson. Bill loved golf and played or practiced any time he could. Sports was also a big part of his life whether it was watching his grandkids, watching on tv, or listening on the radio. Bill had a big, tender heart and was very kind and compassionate towards others and generous..… but he was an Irishman. “Son of a buck”….. he definitely will be missed. Deeply. Those left to cherish his memory include his children: Connie (Steve) Sippel of Schaller, Iowa; Teresa Mahn of Pflugerville, Texas; and Mary (Kevin) Richardson of Hillsboro, Oregon; brothers, Gerald (Rose) O’Meara of Schaller, Iowa and Ron (LaVonne) O’Meara of Hinton, Iowa; sister-in-law, Dorothy O’Meara of Rochester, Minnesota; grandchildren: Nicholas Sippel, Sarah (Adam) Babcock, Daniel Sippel, Thomas Sippel, Jason (Patti) Mahn, Chelsea (Sturgis) Cunningham, Marissa (Jack) Billups, Simone (Andrew) Richardson, and Alexander Richardson; 10 great-grandchildren; 2 great-great-grandchildren; and extended family and friends. Bill was preceded in death by his parents, William and Viola; wife, Beverly; brother, Jim O’Meara; daughter, Debra O’Meara; and son-in-law, Richard Mahn. Unseen, unheard, but always near. Still loved, still missed, and very dear. – An Irish Blessing

The family of William "Bill" O'Meara created this Life Tributes page to make it easy to share your memories.

Send flowers to the O'Meara family.