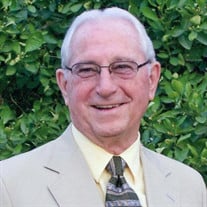 William "Bill" Kozisek, age 88, of Storm Lake, Iowa died on Monday, December 21, 2020 at the Buena Vista Regional Medical Center in Storm Lake. Funeral Mass will be held on Thursday, December 24, 2020 at 10:00 a.m. at St. Mary's Catholic Church in Storm Lake. To watch the recording of the service, please visit Bill's tribute wall. Private burial will be in the church cemetery. Visitation will take place on Wednesday, December 23, 2020 from 4:00-7:00 p.m. with a KC Rosary at 7:00 p.m. all at the Fratzke & Jensen Funeral Home in STORM LAKE. Masks and social distancing are required for guests in attendance. In lieu of flowers, memorials may be given to the Knights of Columbus or St. Mary's Catholic Church in Storm Lake. The Fratzke & Jensen Funeral Home in Storm Lake is in charge of the arrangements. Born near David City, Nebraska on September 16, 1932, Bill graduated high school before moving to Grand Island. This is where, as a mortician trainee in the local hospital, he met the love of his life Doris (JoAnn) Bowman. The two were later married. After receiving a job at Carpenter Paper Company, this new family moved to make their home in Storm Lake, Iowa. Bill and JoAnn have been married for 68 years. Bill continued to work for Carpenter Paper Company for 44 years. During this time, he was consistently recognized for his excellence in sales, holding the honor of Top Salesman many many times over. He’d always say, “Have a plan, and work that plan” and he lived true to that. The church was always near and dear to Bill. He was an Eucharistic Minister and lector, and was very active in the Forth Degree Knights of Columbus. Bill always said: “If I can make someone smile, then they may forget their problems, if even for a minute.” Bill is survived by wife JoAnn, children Janet (Michael Mims) of Frankston, Texas, Patricia Sullivan of Harrison, Arkansas, Karla Scholl of Lincoln, Nebraska, Thomas (Bon) of Garner, Iowa and Douglas (Junko) of Colorado Springs, Colorado. Grandchildren include Andy, Regi (Sam Van Lenning) Ryley Kozisek, Milan Kozisek. Great granddaughter, Knoxlynn Van Lenning. Sister, Mariann Kozisek of Lincoln, Nebraska and brother, Larry Kozisek of Fond du Lac, Wisconsin. He was preceded in death by daughter Lori Lea, brothers Art and Dan, sister Carol, and sisters in law Pauline Kozisek, Chris Kozisek and Jan Kozisek.

The family of William "Bill" Kozisek created this Life Tributes page to make it easy to share your memories.

Send flowers to the Kozisek family.