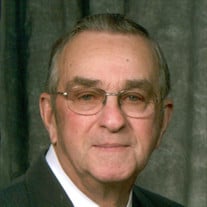 Wendell Ewoldt, age 91, of Alta, Iowa died on Tuesday, June 2, 2020 at the Methodist Manor Retirement Community in Storm Lake. Drive in Funeral services will take place Saturday, June 6, 2020 at 1:00 p.m. at St. John Lutheran Church in Hanover, Iowa. Burial will follow in the church cemetery. The Fratzke & Jensen Funeral Home in Storm Lake is in charge of the arrangements. Wendell Bartling Ewoldt was born December 30, 1928 on a farm near Galva to Rudolph and Norma (Hargens) Ewoldt. He attended a country school where he was the only person in his class. He went on to graduate in 1946 from Alta High School. On April 30, 1937, Wendell, along with this parents and siblings, was baptized at St. Paul Lutheran Church in Aurelia by Pastor William Wolter. He continued to grow in his faith and was confirmed in 1942. Throughout his life, Wendell held strongly onto his faith as an active member of St. John’s Lutheran Church (Hanover). Wendell married his high school sweetheart, Marlys Kolpin, on November 20, 1949 at St. John’s Lutheran Church (Hanover). They spent one year living at the Hayes teacherage, where Marlys taught. After that they moved to Marlys’ family farm, where Wendell grew corn and raised hogs. Wendell participated in multiple conservation efforts throughout the years to prevent erosion, and provide wildlife refuge. Wendell and Marlys had two daughters; Mary Jane born February 16, 1951, and Carol Lea born December 27, 1952. He always enjoyed spending time with the girls. Many times after school, Wendell would be at the kitchen table reading the funnies, and would welcome the girls home with a dish of ice cream and an invitation to watch cartoons until Marlys returned from school. Wendell was a very calm parent and let Marlys handle most disciplining. Wendell had a love for animals. The family farm was home to many hogs, dogs, horses and cats throughout the years. Even after they moved to town, Wendell would drive to the farm every day to feed his farm cats. In 1998, after years of living on the farm, Wendell and Marlys moved to Alta to live in the home Marlys’ parents had built. In his later years, he enjoyed learning the game of golf, taking trips with his wife, spending time with his family, and continuing to farm. Wendell was a quiet man; he didn’t say a lot so when he did everyone would listen. Although he didn’t have many words, he taught his family many life lessons through his actions; how to be a Child of God, how to work hard, how to be honest and kind, and how to love one another. He will forever be remembered and held in their hearts by his daughter, Mary Jane (Gail) Gebers; siblings: Joan Johnson and Bob (Millie) Ewoldt; grandchildren: Dr. Alex (Jann) Murphy, Dr. Kyle (Jen) Murphy, B.J. (Lisa) Melsha, and Kailyn Melsha; step grandchildren: Scott (Renae) Gebers, and Chad (Shannon) Gebers; great-grandchildren: Carly Murphy, Chloe Murphy, Keegan Murphy, and Brynley Murphy; step great-grandchildren: Ryleigh Gebers, Dane Gebers, Will Gebers, Drew Gebers, Hannah Gebers, and Sydney Gebers. Wendell was preceded in death by his wife, Marlys Ewoldt; his daughter, Carol Melsha; and his sister, Shirley Anderson.

The family of Wendell Ewoldt created this Life Tributes page to make it easy to share your memories.

Send flowers to the Ewoldt family.