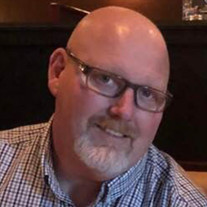 Wayne D. Kies, age 56, of Omaha, Nebraska and formerly of Storm Lake, Iowa died Saturday, November 2, 2019 in California. Memorial services will take place Monday, November 11, 2019 at 11:00 a.m. at St. Mary's Catholic Church in Storm Lake. Visitation will take place Sunday, November 10, 2019 from 1-4:00 p.m. at the Fratzke & Jensen Funeral Home in STORM LAKE. In lieu of flowers, a memorial fund has been established. The Fratzke & Jensen Funeral Home in Storm Lake is in charge of the arrangements. Wayne Donald Kies was born July 10, 1963 in Sac County, Iowa the son of Donald and Rosie (Juilfs) Kies. Growing up, he attended school in Sac City where he graduated from Sac City High School in 1981. Following high school graduation, Wayne continued his education at Wayne State College in Wayne, Nebraska. On November 24, 1984, Wayne was united in marriage to his high school sweetheart, Rachael Massop, at St. Mary’s Catholic Church in Storm Lake. Together, they were blessed with three children: Maddisen, Hannah, and Ezra. In his spare time, Wayne enjoyed watching football, especially the Green Bay Packers and Purdue. He loved being outdoors hunting, fishing and golfing. Playing games and cards as a family was a favorite pastime of Wayne’s. With his big personality, you knew when Wayne walked in the room. You heard him before you saw him, and he didn’t care. He loved everyone for who they were, and people loved him back for who he was. Wayne was hard working, kindhearted, strong, loyal, trustworthy, loving, honest, smart, handsome, charismatic, and a strong leader. Through all these strengths, he was always humble and never too proud to say, “I love you” and said it often – we can all learn something from that. He will be remembered as a loving husband, father, brother, uncle and friend. Wayne will be deeply missed by all who knew and loved him. Those left to cherish his memory include his wife, Rachael Kies of Omaha, Nebraska; children: Maddisen (Vince) Belpulsi of Prior Lake, Minnesota; Hannah (Luke) Hubbard of West Des Moines, Iowa; Ezra Kies (fiancé, Madeline Doudt) of Waukee, Iowa; brother, Eugene (Micki) Kies; sisters: Marlene (Ray) Daisy; Bonnie (Gene) Simpon; mother-in-law, Marlene Massop; brothers-in-law, Doug (Kate) Massop; Mark Schmidt; sister-in-law, Karen (John) Keenan; several nieces; nephews; extended family and many friends. Wayne was preceded in death by his parents, Donald and Rosie Kies; father-in-law, John Massop; and sister-in-law, Brenda Schmidt.

The family of Wayne Donald Kies created this Life Tributes page to make it easy to share your memories.

Send flowers to the Kies family.