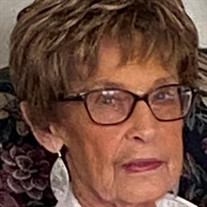 Vivian Anderson, age 88, of Alta, Iowa died on Friday, December 4, 2020 at WEL-Life at Alta. Private family services will be held at St. Mark Lutheran Church in Storm Lake on Monday, December 7, 2020. Burial will be in the Schaller Cemetery... View Obituary & Service Information

The family of Vivian Anderson created this Life Tributes page to make it easy to share your memories.

Send flowers to the Anderson family.