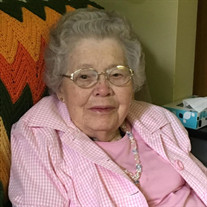 Virginia Jorgensen, age 97, of Storm Lake, Iowa died June 2, 2021 at St. Luke's Lutheran Home in Spencer Iowa. Funeral services will take place Saturday, June 12, 2021 at 10:00 a.m. at the United Methodist Church in Storm Lake. Burial will be in the Buena Vista Memorial Park Cemetery in Storm Lake. Visitation will take place one hour prior to the service at the church. The Fratzke & Jensen Funeral Home in Storm Lake is in charge of the arrangements. Virginia Ellen (Saunders) Jorgensen and her twin brother, Eugene (Gene), were born in Fort Calhoun, Nebraska, on August 21, 1923, the youngest of eight, all of whom have preceded her in death. When “Ginny” was only six, her family left their farm in the middle of the night traveling by buckboard to Manilla, Iowa to join family who could help them weather the Depression. With only one sister, Ginny was a “tomboy,” as tough and fearless as her brothers, who often boasted about walking the narrow beam in the top of the barn before it was destroyed by tornado in 1934. She was a talented singer who participated in state vocal competition, a talent she would later display in the Storm Lake Methodist Church choir. An excellent student, she tutored several male classmates so they could pass to the next grade. After graduating from Manilla High School as a National Honor Society member, Virginia attended Jenny Edmundson Nursing School in Council Bluffs. In 1943, she set aside her nursing education to marry her life-long neighbor, Ken Jorgensen—“the only man around” during WWII—and settled on the farm in Manilla, later moving to Alta and Storm Lake, where she gave her loving support to Ken’s many business ideas. Virginia gave Ken seven children over 14 years—Dave, Gene, Dan, Claudia, Jim, Ellen (EJ), and Beth—and made room for an eighth child, Dennis Cameron. A devoted mother, she taught her children hard work and responsibility, getting up at 4 AM to help deliver newspapers when deep snow covered the ground and often rousing her children from bed during thunderstorms to hunt nightcrawlers to sell for summer vacation cash. She often went without new fashions to provide her kids nicer clothes and spent countless hours sewing. Once asked about her regrets, she responded “I would have done less sewing.” Although she cooked 3 meals a day, 7 days a week, she never really enjoyed cooking, but was a tireless baker, producing countless chocolate chip and molasses cookies, as well as a large pan of cinnamon rolls for every Sunday breakfast. Virginia served as a Girl Scout leader and Sunday school teacher, both adding to her children’s enjoyment and keeping them under her sometimes-resented eye. Due to Ken’s health issues, they spent 22 winters in Florida where Virginia became a champion shuffleboard player. Ruthless “on the board,” she rarely lost a match. She devotedly looked after Ken, at times sacrificing her own health. After his death in 2002, she became more socially interactive in her neighborhood and in her church. In later years, she resided at Methodist Manor and eventually St. Luke’s Retirement Community in Spencer where she enjoyed new friends and was a breath of fresh air. Throughout her life she enjoyed reading, especially the Bible, and she became an avid knitter, a skill picked up during long hospital waits while Ken recovered from coronary bypass surgery. Ginny retained her “tomboy” ways throughout her life. In 1946 she won a bet with her twin by high jumping a fence during her second pregnancy. When her boys were young, she found Dave and Gene playing “burn-out”—repeatedly throwing a baseball as hard and painfully as possible. Seeing Gene crying and pleading to quit, Ginny demanded her turn and threw the ball so hard that Dave ended up begging her to stop. She maintained her love of outdoors well into her 90s. Shortly before her 90th birthday, she visited the “little lake” Discovery Boardwalk with Beth. Claiming to be too unsteady to walk out on the boardwalk, she stayed behind. Upon return, Beth found her at the top of the three-story observation deck. Virginia is survived by six of her children: Dave and Ann (Scott), Gene and Shelley (Sublett), Dan and Barb (Brander), Jim, Ellen (E.J.), and Beth; Claudia (Yale Tucker) tragically passed in 2008. She also leaves behind 31 grandchildren and 35 great-grandchildren, and 4 great-great grandchildren, and many friends in Storm Lake and Spencer. She was preceded in death by Claudia and her grandsons, Levi Harrington (Nathan and Cora Harrington (Claudia)) and Keegan Brown (Stacie Jorgensen Brown (Jim)). She will be missed by many.

The family of Virginia Jorgensen created this Life Tributes page to make it easy to share your memories.

Send flowers to the Jorgensen family.