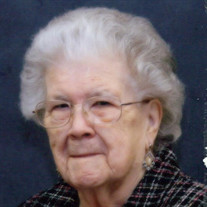 Verna J. Heckert, age 90, of Peterson, Iowa died November 16, 2018 at the Pleasant View Home in Albert City. Funeral services will take place Tuesday, November 20, 2018 at 2:00 p.m. at the United Methodist Church in Peterson. Burial will be in the Oakland Cemetery in Peterson. Visitation will take place Monday, November 19, 2018 from 6-8:00 p.m. at the United Methodist Church in Peterson. The Fratzke & Jensen Funeral Home in Storm Lake is in charge of the arrangements. Verna Juanita Lynda was born March 18, 1928 in Peterson, Iowa the daughter of Allen and Lyla (Hill) Lynde. Growing up, she attended high school in Peterson and furthered her education by attending Beautician School in Des Moines, Iowa. Upon returning to Peterson, she married Myrl Heckert and raise five children. Verna worked as a beautician for many years from her home while raising her children. She often would make house calls to the elderly who could not get out as well. Verna was active in the church and community. She belonged to the womens circle and was always volunteering to make pies for any event. Verna also helped with the Babes program at the elementary school and volunteered several years with the Heritage Club. Those left to cherish her memory include her children: Myrl Rex Jr. and Gail Heckert of Peterson, Iowa; Larry and Jane Heckert of Hazelton, Iowa; Gloria and Jim Schnepf of New Hartford, Iowa; Allen Heckert of Genoa City, Wisconsin; and Melinda Johnson of Alta, Iowa; 13 grandchildren; 12 great grandchildren; two brothers: Robert Lynde of Washington, Iowa; Don and Norma Lynde of Rockerville, South Dakota; one sister, Virginia Pennel of Hill City, South Dakota; extended family and friends. Verna was preceded in death by her parents, Allen and Lyla Lynde; husband, Myrl Heckert; sister, Barbara Pennel; infant grandson, Myrl Rex Heckert III; two brothers-in-law: Robert Pennel and Warren Pennel; and one sister-in-law, Donna Lynde.

The family of Verna Juanita Heckert created this Life Tributes page to make it easy to share your memories.

Send flowers to the Heckert family.