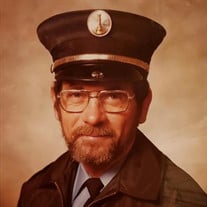 Tom Wallerstedt, age 83 of Storm Lake, IA, passed away peacefully at his home on January 26, 2022. Celebration of Life Services will be held on Saturday, January 29, 2022 at 10:30 a.m. at Fratzke & Jensen Funeral Home in Storm Lake, Iowa. Visitation will be one hour prior at the Funeral Home in STORM LAKE. Fratzke & Jensen Funeral Home in Storm Lake is in charge of arrangements. Tommy Lyle Wallerstedt was born on April 25, 1938, to parents Russell and Ruby (Wellington) Wallerstedt in Sac City, IA. He grew up attending school at Sac Community Schools, along with his five siblings. On November 9, 1957, Tom married Sandra Chisholm. This union was blessed with two children: son Scott in 1959 and daughter Toni in 1974. They lived in Sac City where Tom worked at various places including Noble Manufacturing and Otto Engineering as well as for Benny and Joann Richards. He and Sandy also owned and operated Indian Lanes Bowling Alley for several years. Tom served on the Sac City Volunteer Fire Department from 1967 to 1987. In 1987, they moved to Storm Lake where Tom worked for Kuehl & Payer as a surveying engineer until his retirement. Tom loved watching NASCAR and attending races with Scott. He was a regular at Buena Vista Raceway in Alta on Wednesday nights throughout the summer. Tom also liked to go fishing and when Toni was younger, he and she would often go to Lake View, as well as many other ‘secret spots’ they found over the years. Tom was an avid golfer who loved being out on the course any chance he could get. He played in tournaments all over and always enjoyed trying a new course. For many years, Tom coordinated golf outings and tournaments for Storm Lake Golf Course and Alta Country Club, before handing over the reins to someone else in 2020. Tom had a bit of a liking, one could say, for the Iowa Hawkeyes. He never missed watching or listening to Hawkeye basketball games and enjoyed watching them play football as well. He also rooted for the Kansas City Chiefs. Tom was a proud grandpa who loved spending time with his family. He was super excited when he became a great-grandpa and the smile he wears in pictures while holding his great grandkids shows that. He will be missed dearly by all those who knew and loved him. Left to cherish his memory are his wife, Sandy Wallerstedt of Storm Lake, IA; children: Scott (Judi) Wallerstedt of Ankeny, IA, Toni (Mike) Weber of Yankton, SD; grandchildren: Bekka (Nathan) Robey of Belle Plaine, MN, Justine (Devon) Pierce of Odebolt, IA, Taylor Weber and Abby Weber both of Yankton, SD; great-grandchildren: Remy and Ridge Pierce; many nieces, nephews, other extended family members and friends. Tom was preceded in death by his parents, Russell Wallerstedt and Ruby (Ernie) Niles; siblings: James Wallerstedt, Robert (Kay) Wallerstedt, Richard (Betty) Wallerstedt, Karen (Kenny) Flink, Mark Wallerstedt, and Gordon Niles; parents-in-law: Russell and Jessi Chisholm; and brother-in-law: Richard Chisholm.

Tom Wallerstedt, age 83 of Storm Lake, IA, passed away peacefully at his home on January 26, 2022. Celebration of Life Services will be held on Saturday, January 29, 2022 at 10:30 a.m. at Fratzke & Jensen Funeral Home in Storm Lake, Iowa.... View Obituary & Service Information

The family of Tom Wallerstedt created this Life Tributes page to make it easy to share your memories.

Send flowers to the Wallerstedt family.