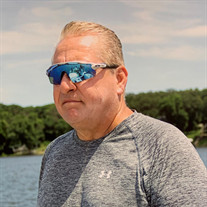 Timothy D. Radke, age 57, of Alta, Iowa died September 8, 2019 at Methodist Manor Retirement Community in Storm Lake. Funeral services will take place Thursday, September 12, 2019 at 11:00 a.m. at St. Paul Lutheran Church in ALTA. Burial will be in the Woodlawn Cemetery in Alta. Visitation will take place Wednesday, September 11, 2019 from 3-8:00 p.m. with the family present from 4-8:00 p.m. at the Fratzke & Jensen Funeral Home in STORM LAKE. In lieu of flowers, a memorial fund has been established. The Fratzke & Jensen Funeral Home in Storm Lake is in charge of the arrangements. Timothy David Radke, the son of Leland and JoAnn (Kent) Radke, was born March 21, 1962 in Alta, Iowa. As an infant, Timothy was baptized at St. Paul Lutheran Church in Alta where he was later confirmed in 1976. Growing up, Tim attended grade school in Alta and graduated from Alta High School in 1980. On August 28, 1993, Tim was united in marriage to Paula Shearer. The couple was blessed with two children, Nick and Ryan. Throughout his working career, Tim was the owner of Alta Implement Company Inc. and other area businesses. Tim was a member of St. Paul Lutheran Church in Alta. He was active in the community through numerous committees and clubs including: Alta Ball Sign Committee, Alta Schools Facilities Committee, Alta-Aurelia Booster Club, and was President of the Alta Country Club. He also coached NYFL, youth baseball, and youth basketball. Tim loved snowmobiling, spending time with family and friends in Okoboji and attending all his children’s school activities and sporting events. He was known for having a great sense of humor and endless nicknames. He was a terrific father and husband, friend and mentor to many and he will be greatly missed. Those left to cherish his memory include his wife, Paula Radke of Alta, Iowa; sons, Nick Radke (Stephanie Stange) and Ryan Radke (Courtney Paulsen) of Alta, Iowa; brother, Brian (Lisa Herr) Radke of Sioux Falls, South Dakota; sisters: Lori (Steve) Elliott of Mesa, Arizona and Nancy (Gary) Snyder of Alta, Iowa; parents-in-law, Paul and Roberta Shearer of Spencer, Iowa; many nieces; nephews; cousins; extended family and friends. Tim was preceded in death by his parents, Leland and JoAnn Radke.

The family of Timothy David Radke created this Life Tributes page to make it easy to share your memories.

Send flowers to the Radke family.