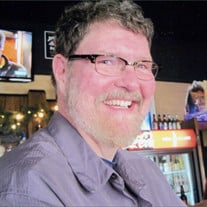 Steven (Jado) Ray Tjaden, age 63, of Aurelia (formerly of Storm Lake) died peacefully in his sleep on Saturday, December 5, 2020 at St. Luke’s hospital in Sioux City following a non-COVID-19-related illness. Private family services will be held on Thursday, December 10, 2020 at 1:30 p.m. at the Fratzke & Jensen Funeral Home in STORM LAKE. To watch the recording of the service, please visit Steve's tribute wall. Public visitation will take place on Wednesday, December 9, 2020 from 4:00-7:00 p.m. at the funeral home in STORM LAKE. Masks and social distancing are required for guests in attendance at the services. In lieu of flowers, the family requests that memorials be given to the St. Luke's Children's Miracle Network- 2720 Stone Park Blvd, Sioux City, IA 51104; Aurelia Fire Department- 110 Myrtle St, Aurelia, IA 51005; Aurelia Kiwanis Club- 236 Main Street Aurelia, IA 51005; or Storm Lake Dollars For Scholars- 119 W 6th St., Storm Lake, Iowa, 50588. The Fratzke & Jensen Funeral Home in Storm Lake is in charge of the arrangements. Steve was born on November 17, 1957 in Storm Lake, Iowa, the son of Loren and Myrtle (Marnie) (Lemker) Tjaden. He was educated in the Storm Lake Community School system, graduating in 1976. Following high school, Steve worked at Hygrade and furthered his education, graduating from Buena Vista College in 1985. Steve dedicated his personal and professional life to helping others – through both work and volunteering. No one missed out on his wit or kind and thoughtful ear whenever they needed or wanted advice. His desire to help led him to earning his Master’s degree in Social Work in 2014 from the University of Iowa, ushering in the career and mission he’d always desired. His current job at United Community Health Center in Storm Lake allowed him to use his gift for helping others as a Mental Health Therapist. He had previous stops in the same role at Siouxland Mental Health in Sioux City and CCUSO in Cherokee. No matter the situation or where, Steve always brought care and good humor to the table and used that to give the help that was needed. The roots of his calling to be a therapist were in those different lines of work. After Hygrade and graduation from BV, he spent time at Genesis, and the Lutheran Group Home, as well has his first (unofficial) therapy job – the bartender at Puff’s. It was there that Steve met the love of his life, Roxanne Steig. The pair were united in marriage on August 4, 1984 at St Paul’s United Methodist Church in Cherokee, Iowa. They built a life together that was always based in love. They welcomed a daughter, Elizabeth Frances, and a son, Benjamin Robert Earl, and raised their children alongside Storm Lake – sharing countless memories and life milestones together. His gregarious humor and confidence – his full-throated rendition of “God Bless America” was a sight to see – made certain there was never a dull moment in the Tjaden household. He had countless interests, including carving, cooking, reading, learning the guitar and was a co-founder of Albatross Rugby. He was a lifelong fan of the Kansas City Chiefs and the Chicago Cubs, and reveled in his favorite teams’ long-awaited recent triumphs. Steve was the biggest fan, though, of his children and their spouses. Whether it was watching both of his kids perform in marching band, Liz in all her choir and musical theater exploits or Ben’s woodworking, golf and trapshooting, their successes brought more joy than anything else could hope to. He was preceded in death by his parents, Loren and Marnie Tjaden, infant brother Larry Tjaden, his older brother David Tjaden and his wife Beverly, his in-laws Robert and Frances Steig, and brother-in-law Russell Steig. Left to cherish Steve’s memory are his wife Roxanne Tjaden, Aurelia, Iowa; children Elizabeth (Jeremiah) Davis, North Liberty, Iowa; Benjamin (Brooke) Tjaden, Muscatine, Iowa; his pups and grand pups, Mya, Carver, Kinnick, Lilly, and Billy; brother Dan (Diane) Tjaden, North Sioux City, S.D., sister Lori (Mark) Lewis, Checotah, Okla.; brother-in-law Roger (Ruth) Steig, Webster City, IA; sister-in-law Dorothy Steig, Indianola, IA; in addition to aunts, uncles, cousins, nieces, and nephews.

The family of Steve "Jado" Tjaden created this Life Tributes page to make it easy to share your memories.

Send flowers to the Tjaden family.