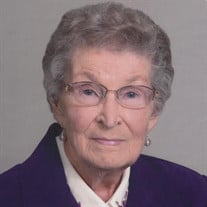 Ruby Magnuson, age 93, of Alta, Iowa died on Monday, November 9, 2020 at the Methodist Manor Retirement Community in Storm Lake. Memorial services will be Saturday, August 21, 2021 at 2:00 p.m. at Trinity Lutheran Church in Alta, Iowa. Condolences can be posted to the Fratzke & Jensen Funeral Home website (https://www.fratzkejensen.com/) or mailed to Kathryn Fuger, 8014 Summit Street, Lenexa KS 66215. In lieu of flowers, the family suggests a memorial to the Cystic Fibrosis Foundation (www.cf.org/), the Crohn’s and Colitis Foundation (https://www.crohnscolitisfoundation.org/), the Alzheimer’s Association (www.alz.org/), Trinity Lutheran Church of Alta, or an organization of the donor’s choice. The Fratzke & Jensen Funeral Home in Alta is in charge of the arrangements. Ruby Irene Magnuson was born July 9, 1927, at the home of her grandparents in Floyd, Iowa, delivered by her grandfather, Dr. E. A. Nash. She was the daughter of Lewis and Bessie Brees of Peterson, Iowa. She was baptized at First United Methodist Church in Peterson, Iowa. She attended school in Peterson, graduating in 1944 at the age of 16. She remained at home working at the local newspaper office for a year. She then moved to Storm Lake, Iowa, and was employed by Northwestern Bell Telephone Company for three years. She was united in marriage to Carl Robert Magnuson of Alta on August 17, 1947, at First United Methodist Church in Peterson, Iowa. She became a farmer’s wife in the Alta/Aurelia area. The couple eventually purchased a farm west of Alta. They were blessed with three children: Kathryn, Sharon, and Robert. In 1971, Ruby and Bob moved to Alta, and Bob opened a Real Estate Office. After the children left home, Ruby took nurse’s aide training at Buena Vista Hospital where she continued working a few years. Ruby was a faithful member of Trinity Lutheran Church and took part in the Women of the Evangelical Lutheran Church in America activities. She was a charter member of the Alta Golf and Country Club, serving as Golf Chairman for two years. Ruby and Bob enjoyed playing golf together and going to tournaments for many years. Ruby even had a hole-in-one twice. After retirement, Ruby and Bob took several bus tours and wintertime vacations in Arizona. Other activities she enjoyed were bowling, crosswords, playing card games with friends, and bridge clubs. She especially treasured being with family. In the last year of her life, Ruby moved to WEL-Life Assisted Living at Alta and then Methodist Manor Retirement Community in Storm Lake, Iowa, where she received excellent care. Those left to cherish her memory are: Children, Dr. Kathryn Fuger (Dr. James Brandt), Sharon Maguire (Frank), Robert Magnuson (Cheryl); Grandchildren, Kristen Jacobsen (Andrew), Ryan Fuger (Amy Hatch), Emily Magnuson; Great-Grandchildren, Sydney Fuger, Maxwell Fuger, and step-great-granddaughter, Taylor Jacobsen; one nephew and three nieces. Preceding her in death was her beloved husband of 65 years in 2014. Others were her parents, Lewis and Bessie Brees; brother, Harry; parents-in-law, Carl and Jennie Magnuson; two infant grandchildren; sister- and brother-in-law, Doris and Leonard Tierney; three nieces and one nephew.

The family of Ruby Magnuson created this Life Tributes page to make it easy to share your memories.

Send flowers to the Magnuson family.