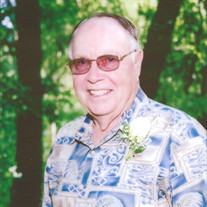 Roger D. Sievers, age 86, of Storm Lake, Iowa died December 15, 2019 at Methodist Manor Retirement Community in Storm Lake. Funeral services will take place Wednesday, December 18, 2019 at 10:30 a.m. at Grace Lutheran Church in Storm Lake. Burial will be in the Storm Lake Cemetery. Visitation will take place Tuesday, December 17, 2019 from 5-7:00 p.m. at the Fratzke & Jensen Funeral Home in STORM LAKE. The Fratzke & Jensen Funeral Home in Storm Lake is in charge of the arrangements. Roger Dean Sievers was born May 12, 1933 on the family farm near Albert City, Iowa to Fred H. and Leona L. (Kruse) Sievers.  He was baptized at Zion Lutheran Church rural Storm Lake on May 25, 1933 and confirmed at St John's Lutheran Church in Storm Lake on June 15, 1947.  He graduated from Rembrandt High School in 1950. Roger farmed after graduation until entering the Army in 1953. After being honorably discharged in 1955 he resumed farming. On September 29, 1957 he married Delores Pyle at St John's Lutheran Church rural Albert City.  They farmed at Rembrandt, Webb, and Spencer and for 28 years at Albert City.  They retired from farming in November 1995 at which time they moved to Storm Lake.  In addition to farming, Roger worked several part time jobs including Dudley Implement in Laurens, Lincoln Township assessor, Farm Service and Merrill Manufacturing of Storm Lake. He was also Assistant Weed Commissioner for Buena Vista County for several years. Roger and Delores set up the voting machines at the Buena Vista County voting precincts.  Roger held several offices in the churches he attended including Sunday School Superintendent, Elder, Chairman and Trustee.  He loved traveling all over the country, including several trips to Hawaii to visit Denise and her family. He enjoyed boating on their pontoon at their cabin at Lost Island and later years on Storm Lake.  They enjoyed playing cards and belonged to a couples 500 club for many years.  He was preceded in death by his son Gregory, his parents, his sister Jeanette and her husband Daryl Terrill.  Those left to cherish his memory include his wife Delores and two daughters Rhonda (Jerry) Byers of Papillion, NE and Denise (Andrew) Ishikawa of Honolulu, HI.  Grandchildren Trudy (Paul) Dailey of West Des Moines, IA, Katie (Todd) Nelson of Huxley, IA and Amanda Ishikawa and her fiancé Andrew Murphy of Sacramento, CA.  Three great grandchildren, Lucas Dailey, Zachary Dailey, Marlie Nelson and three step grandchildren Lindsay, Erin (Jordan), and Paul Byers of Omaha, NE. He is also survived by one brother Ronnie and his wife Margo of Rembrandt, IA, and many nieces and nephews.

The family of Roger D. Sievers created this Life Tributes page to make it easy to share your memories.

Send flowers to the Sievers family.