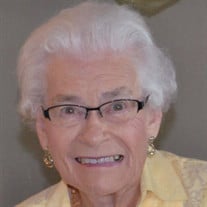 Roberta Allison, age 98, of Storm Lake, Iowa formerly of Newell, Iowa died on Thursday, February 6, 2020 at the Methodist Manor Retirement Community in Storm Lake. Funeral services will be held on Monday, February 10, 2020 at 10:00 a.m. at St. Peter Lutheran Church in Newell. Burial will be in the Union Cemetery in Pomeroy. Visitation will take place on Sunday, February 9, 2020 from 2:00-5:00 p.m. at the Fratzke & Jensen Funeral Home in STORM LAKE. In lieu of flowers, the family requests memorials be given to the Newell Historical Society: PO Box 5 Newell, Iowa 50568. The Fratzke & Jensen Funeral Home in Storm Lake is in charge of the arrangements. Roberta was born August 25, 1921 on a farm west of Pomeroy to Bert and Agnes Doyle Knights. She graduated from Pomeroy High School as valedictorian of her class in 1939 and was captain of her volleyball team. Attended Buena Vista College and received her teacher's certificate. She was a dedicated teacher who taught country school in Pocahontas and Calhoun County schools. On New Year’s Day, January 1,1944 she was united in marriage to Raymond Doyen at Immanuel Lutheran Church in Pomeroy. This union was blessed with two children, Robert and Marilyn. They were members of St. Peters Lutheran Church in Newell where Roberta taught Sunday school and was active in the women's organizations. She was “Aunt Bobbie” to many nieces and nephews. They farmed south of Newell from 1947 to 1977. Roberta enjoyed gardening and living on the farm. She opened "Roberta's Beauty Bar" in their home in 1971. Raymond passed away in 1977. Roberta and Raymond enjoyed Thursday night dances at the Cobblestone in Storm Lake for many years. On October 24,1981 Roberta married a good family friend, Vigo Bodholdt. The couple enjoyed traveling and lived in Storm Lake till his death in 1982. In 1982, Roberta moved to her new home in Newell. She married Clifford Alison in 1988. They enjoyed traveling and spent many winters in Arizona together. Clifford passed away in 2000. Roberta continued to live in her home until moving to Lake Pointe Villa in 2009. Roberta passed away at Methodist Manor. As a result of her hobbies, her family is blessed with her beautiful china and oil paintings. She will be remembered for her strength and endurance during difficult times, her continual encouragement to family members and her smile that would melt your heart. She will be missed but so many memories will keep her spirit alive. She was blessed with family, grandchildren, and great-grandchildren. Those left to cherish her memory include her daughter, Marliyn (Paul) Monson of Newell, Iowa; daughter-in-law, Barb Doyen of Arizona; sister, Faye Holtapp of Omaha, Nebraska; grandchildren: Scott (Jill) Monson of Alaska; Michael (Emily) Monson of Minnesota; Jodi Doyen and Dwain Shields of Texas; Chris (Jessica) Doyen of Washington; eight great-grandchildren: Tyler and Tyanna Monson; Avery and Gavin Monson; Chad, Luke, Owen, and Quin Doyen; step-daughters: Bobbie (Terry) Andersen, Pat (Don) Sievers, Kayla (Mike) Steffens, and their families; extended family and friends. Roberta was preceded in death by her parents, Bert and Agnes Knights; husbands: Raymond Doyen, Vigo Bodholdt, and Clifford Allison; son and daughter-in-law: Robert and Beverly Doyen; sisters: Jean (Donald) LeWarne, Joy (Dale) Behrends, and Lorraine Terry; sister-in-law, Vera (Paul) Welander; brothers-in-law, Donald Doyen and Vernon Holtapp.

The family of Roberta J. Allison created this Life Tributes page to make it easy to share your memories.

Send flowers to the Allison family.