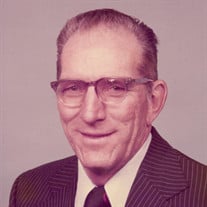 Robert J. Nelsen, age 95, of Newell, Iowa died Friday, September 4, 2020 at the Good Samaritan Society of Newell. Funeral services will take place Wednesday, September 9, 2020 at 10:00 a.m. at the First Congregational United Church of Christ in Newell. To watch the recording of the service, please click the link https://us02web.zoom.us/rec/share/zaJkPIbK3Wa2XVEj0twMS0vys05BfMow_cpR7KByhd1ichch-Qfjat4bKg4_KLdF.MOO9YSOwyPyiZmZ1 and enter in the password: 87h$N+Kh. Burial will be in the Newell Cemetery. Visitation will take place Tuesday, September 8, 2020 from 5-8:00 p.m. at the Fratzke & Jensen Funeral Home in Storm Lake. The Fratzke & Jensen Funeral Home in Storm Lake is in charge of the arrangements. Robert John Nelsen was born in a small house on the west side of Newell to Drs. Hart F. and Minnie M. (Frydenborg) Nelsen on September 11, 1924. His brother Hart J Nelsen welcomed him to his new home. In his younger years he enjoyed hunting ducks along the Raccoon river. He told the story about he and his dad getting caught in the Armistice Day blizzard while hunting ducks. He and his dad could hardly make the mile walk back to the car in the howling snow. He attended and graduated from the Newell School in 1942. After graduating from high school he attended Buena Vista College for one semester but sitting in a classroom wasn’t for him so he left college and found work as a laborer doing jobs that ranged from mixing the mortar for the chimney on the new Newell school gymnasium in the early forties to working in a California ship yard and finally coming back home to be a hired man for several farmers in the Newell area. Never one to let the grass grow under his feet Bob was always active. Bob had a love for sports. He was competitive in baseball and basketball in high school and after high school he continued to play basketball on the ‘town team’ until he was in his thirties. And then there is the game of golf. Bob was not only the ultimate golfer, but he had a love for the golf course itself. Many of the trees on the Newell golf course were planted and nourished by Bob through the years. He started farming on his own by Albert City in 1948. On February 15, 1948 he married Pearl Jensen in the Nain Lutheran Church in Newell. After living a few weeks with Bob’s parents in Newell the newlyweds moved to the farm and into a house with no plumbing and one wood burning stove for heat. It just happened that March was the coldest on record and the house was cold, so cold a pail of water froze one night. Bob thought this was no place to bring his new bride, so they moved back to Newell into his parent’s house for a few weeks until the weather warmed. Bob and Pearl went on to raise their family in that house, after some remodeling to make it more livable. In September of 1949 a little girl, Marie was born into their world followed by the arrival of Jim in February of 1951. In August of 1971, Pearl sadly passed away of cancer at the age of 46. In January of 1973 Bob married Marvel Pearson. In 1978 Bob and Marvel moved off the farm to Newell where they lived until 2016 when they moved into the Good Samaritan home in Newell. They had enjoyed 44 years of marriage when Marvel passed away in 2017. Bob is survived by his daughter, Marie (John) Lowe of Davenport, Iowa; his son, Jim (Marilyn) Nelsen of Albert City, Iowa; his grandchildren: Sally Lowe of Peoria, Illinois; Heather (Rich) Howard of Viera, Florida and Alan (Karna) Nelsen of Albert City, Iowa; great grandchildren: Ryleigh Sauter, Bailee Sauter, Mackenzie Sauter, Olivia Nelsen, Lindsey Nelsen, Dane Nelsen, Isabelle Howard, Brayden Howard, and Weston Howard. Preceding Bob in death are his parents: Drs Hart and Minnie Nelsen; brother, Hart J. Nelsen; Bob’s first wife Pearl; second wife Marvel and granddaughter Lisa Sauter.

The family of Robert J. Nelsen created this Life Tributes page to make it easy to share your memories.

Send flowers to the Nelsen family.