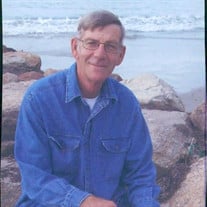 Robert “Bob” Victor Harris, age 72, of Alta, Iowa, died June 25, 2021 at his home. A military service will be held at a later date. The Fratzke & Jensen Funeral Home in Storm Lake is in charge of arrangements. Robert “Bob” Victor Harris was born May 11, 1949 to Michael and Theone (Olson) Harris in Laurens, Iowa. He attended grade school and high school in Laurens, Iowa, graduating with the class of l968. Bob and Linda Thomas were united in marriage on February 24, 1973 in Flandreau, South Dakota. Bob and Linda were blessed with three children: Chris, Cari and Colin. Bob entered the military service immediately after his high school graduation. He was a member of the Navy and Army, serving during the Vietnam War and retiring as a Major on May 11, 2009. He was a proud veteran and a long-time member of the VFW. He enjoyed fishing, hunting, and working with his hands, as he was in construction by trade outside of the military. He was a quiet man but loved spending time with his family. Those left to cherish Bob’s memory include his children: Cari (Brad) Cawley of Hartford, South Dakota, Colin Harris of Fort Dodge, Iowa and Phillip (Elis) Binder of Woodside, New York; daughter-in-law, Jody Harris; grandchildren: Taryn and Rylee Cawley, Peyton and Preston Harris and Darren and Audrey Binder; brother, Mick (Lorraine) Harris of Eaton, Colorado and sister, Mary (Larry) Sprick of Alta, Iowa. Bob was preceded in death by his wife, Linda Harris, and his son, Chris Harris.

The family of Robert Harris created this Life Tributes page to make it easy to share your memories.

Send flowers to the Harris family.