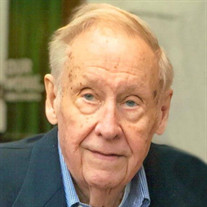 Robert P. Bergendoff, age 85, of Storm Lake, Iowa died Monday, October 12, 2020 in Fort Dodge, Iowa. Private Family Services will be held on Monday, October 19, 2020 at 10:30 a.m. at the Fratzke & Jensen Funeral Home in Storm Lake. To watch the live stream of the service, please click the link: https://us02web.zoom.us/j/82865107811 and enter the password: funeral. A recording of the service will also be uploaded to the website. Burial will be in the Storm Lake Cemetery. PUBLIC visitation will take place on Sunday, October 18, 2020 from 4:00-6:00 p.m. at the funeral home in STORM LAKE. Masks are required for guests in attendance at the visitation. In lieu of flowers, the family requests that memorials be given to the Paula J. Baber Hospice House: 2630 9th Ave S, Fort Dodge, IA 50501. The Fratzke & Jensen Funeral Home in Storm Lake is in charge of the arrangements. Robert Perry Bergendoff was born May 3, 1935 in Omaha, Nebraska the son of Rueben and Dorothy (Lindgren) Bergendoff. Bob was an Eagle Scout in 1951. He graduated from Southwest High School in Kansas City, Missouri in 1953. It was during that time, Bob met his future wife, Gwen. Following high school graduation, he continued his education at the University of Colorado where he graduated with a bachelor’s degree in Civil Engineering and was a member of Phi Kappa Psi Fraternity. In 1957, he went to work for HNTB in Kansas City and opened the Chicago office in 1967. On April 13, 1957, Bob was united in marriage to Gwen Erickson in Kansas City, Missouri. Together, they were blessed with three daughters: Lisa, Lori, and Linda Jo. Bob and Gwen enjoyed 53 years of marriage together. One highlight was the wonderful week they spent celebrating their 50th anniversary with their children and families at Fort Myers Beach, Florida. Bob served as President of the Chicago Chapter of the Illinois Society of Professional Engineers and as State President of ISPE. He was Chairman of Illinois Architect-Engineers Council in 1988 – 1989. Bob also served as a trustee of the Village of Inverness for 10 years. He retired from engineering in 1992 from Flour Daniel in Chicago. In 1994, Bob and Gwen moved to Storm Lake, Iowa. Bob continued to be active within the community and served as the President of the Chamber of Commerce in 1998. He was the Methodist Manor secretary of the board of directors in 2003; on the board of trustees from 2000-2008; and chairman of the board in 2004. Bob was a member of Storm Lake PRIDE; secretary for the South—West Shoreline Sanitary District and named “Hero” by the US 20 Corridor Association in 2016 in support of the completion of the Highway 20 modernization project. Bob was also a member of the Eagle’s Nest. In his spare time, Bob enjoyed living on the lake, boating, birdwatching, and playing golf. He treasured spending time with his children and grandchildren. Bob loved doing jigsaw puzzles and especially loved going out to eat with his Friday night dinner group. Family was important to Bob and he will be deeply missed by all who knew and loved him. Those left to cherish his memory include his children: Lisa (Loren) Anderson of Marathon, Iowa; Lori Haberman of St. Peters, Missouri; Linda Jo (Guy) Grissom of New Orleans, Louisiana; grandchildren: Brian (Stacie) Anderson; Brittany (Brad) Ganeff; Michelle Anderson; Hannah Haberman; Erin (fiancé, Lane Hacker) Haberman; great grandchildren: Audrey, Morris, and Mawer Anderson; Nora and Ethan Ganeff; sister, Marge (Dave) Vesprille of Brevard, North Carolina; brother-in-law, Duncan (Jeanne) Erickson of Salem, South Carolina; nieces; nephews; extended family and friends. Bob was preceded in death by his parents; loving wife, Gwen; two brothers: Richard and Raymond; son-in-law, Ronnie Weber; and three great grandchildren: Amie, Dillion and Emerson Ganeff.

The family of Robert P. Bergendoff created this Life Tributes page to make it easy to share your memories.

Send flowers to the Bergendoff family.