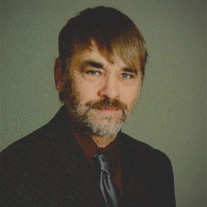 Rick Peterson, age 59, of Alta, Iowa died February 20, 2022 at Trinity Regional Medical Center in Fort Dodge, Iowa. Funeral Services will be held Saturday, February 26, 2022 at 1:00 p.m. at the St. Paul Lutheran Church in Alta, Iowa. Burial will be in the Scandinavian Cemetery in Alta. Visitation will be held Friday, February 25, 2022 from 5-7 p.m. at the Fratzke & Jensen Funeral Home in ALTA. The Fratzke & Jensen Funeral Home in Alta is in charge of arrangements. Rick Lee Peterson was born in Alta, Iowa on November 30, 1962 to Harold and Beverly Peterson. As the youngest of seven children, family was important to him from a young age. He attended school in Alta and graduated from Alta High School in 1981. He was a devoted Christian and God was at the center of his life. Rick was baptized, confirmed, and married at St. Paul Lutheran Church in Alta where he remained a lifelong member. He loved attending church on Sundays and serving as a church Elder. Rick eagerly awaited being reunited with Christ in Heaven. Rick loved being a dad and grandpa. His family was his whole world. He enjoyed spending time with his kids and grandkids, and they were the pride and joy of his life. Holidays were a special time for Rick. He especially looked forward to Christmas and planned for it all year long. There was nothing Rick enjoyed more than watching his grandkids play or playing a game of cards or cornhole with his kids. Rick was a hard worker. When he was younger, he farmed and raised hogs with his brother for many years. For the last ten years, he worked with Melander’s in Storm Lake delivering appliances. He enjoyed working with the guys there and sharing jokes. Rick also enjoyed working on the farm, taking care of his cows, and staying busy with other projects like shingling houses or wood working. He liked collecting Coca-Cola items and watching the Minnesota Vikings play football on Sundays. He would have loved to see them win a Super Bowl. Rick also liked watching movies at home with his favorite treat - movie theater popcorn. Rick was a quiet, kind, and humble man. He was genuine and always thinking of others. Rick was an inspiration to all who knew him and will be greatly missed by his family and friends. He is survived by his three children: Christopher (Bree) Peterson of Aurelia, Iowa; Stephanie (Jordan) Mandernach of Ames, Iowa; Jeremy (Ashton) Peterson of Alta, Iowa; seven grandchildren: Lylah, Everly, and Kyler Peterson of Aurelia, Iowa; Paisley and Oaklynn Mandernach of Ames, Iowa; Kinsley and Baby Peterson of Alta, Iowa; his siblings: Dan Peterson of Alta, Iowa; Vicky (Jeff) Lower of Altoona, Iowa; Scott (Peg) Peterson of Ogden, Iowa; Cindy (Joe) Scheuring of Defiance, Iowa; Terry (Roxanne) Peterson of Alta, Iowa; the mother of his children, Paula Hinkeldey of Alta, Iowa, many nieces and nephews, extended family, and friends. He is preceded in death by his parents Harold & Beverly (Munz) Peterson and his sister Kathy Fahr.

The family of Rick Peterson created this Life Tributes page to make it easy to share your memories.

Send flowers to the Peterson family.