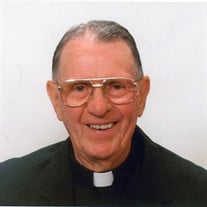 Reverend Paul White, age 87, of St. Columbans, Nebraska formerly of Fonda, Iowa died on Tuesday, October 23, 2018 in Papillion, Nebraska. Funeral Mass will be held on Tuesday, October 30, 2018 at 10:30 a.m. at Our Lady of Good Counsel Catholic Church in Fonda. Burial will be in the Mt. Zion Cemetery in Fonda. Visitation will take place on Monday, October 29, 2018 from 6:30-8:00 p.m. at the church. The Fratzke & Jensen Funeral Home in Storm Lake is in charge of the arrangements. Fr. Paul Joseph White was born August 6, 1931 in Fonda Iowa. His parents were Louis R. and Mary Lillian White. He attended Our Lady of Good Counsel Grade and High Schools in Fonda. He entered St. Columbans Minor Seminary Silver Creek, New York in September 1950 for special Latin Studies. In September 1951 he went to St. Columbans College and Seminary in Milton, Massachusetts. The following year he went to the Columban Spiritual year in Bristol, Rhode Island. Major seminary studies in Milton began in September 1953. He was ordained on December, 20, 1958 by Most Rev Eric MacKenzie D.D. at the Milton Major Seminary. In January 1959 he was appointed to Korea where he began seven months of language studies at the Columban House in Donamdong, Seoul. Language study. He then was assigned to Yang Yang parish in the diocese of Chun Cheong, Kangwondo. He became temporary pastor 1961 62 Samchock, Buk Pyeong parish. Subsequently he did further language study in Kwangju City for seven months. In July 1963 became diocesan bursar at the bishop's residence in Chun Cheon. In August 64 he had some health problems. In July 1965 he went on home vacation but spent a good deal of that time recovering from very poor health. He returned to Korea in 1966 and served as an assistant pastor in Kangneung, Kangwondo. From 1967 to 1970 he served a pastor in Inje, Kangwondo, just south of the border with North Korea. After home vacation in 1970, he returned to Korea in 1971 and once again was bursar in the Bishop’s House in Chun Cheon. He was appointed as a member of the Chun Cheon District Council in which he served from September 1972 to 1976. He had a six month home vacation in 1975. During 1976 he was in Jung Seon, Kangwondo. From 1977 to 1979 he was pastor in Sok Cho, Kangwondo, next to the East Sea. In May 1980 Paul left for home vacation and studies at Maryknoll in America for one year. He also worked as an auxiliary chaplain at the SAC Air Base near St. Columbans. He returned to Korea in May 1981 and was assigned as pastor at Hallim parish in Chejudo. In June 1983 he became pastor in Bucheon City, Inchon Diocese for one year. In June 1983 Paul went to Seoul where he started Gamblers Anonymous in Korea. Paul had faced his own addiction to gambling and then sought to help others. While working full time with Gamblers Anonymous Paul moved to the Columban house in Wang Shim Ri, Seoul. Other Columbans in specialized ministries were his companions there. For nine years he helped to start twelve Gamblers Anonymous meetings in various parts of South Korea. During this time he also visited the Philippines where he tried to develop Gamblers Anonymous in Manila and Cebu. In March 1996 Paul went to Omaha for Heart Angioplasty. He subsequently was appointed to the U.S. Region and went to the Korean Catholic Center, St. Gregory Nazianzen Church in Los Angeles. In 2002 he moved to the Columban house on North Vermont Avenue in Los Angeles. From there he continued his work with Gamblers Anonymous. In 2009 he moved to the Columban house near Omaha, NE. He attended Gamblers Anonymous meetings, and did mass and confession supply work, particularly at Hillcrest Rehabilitation Center in Bellevue, NE until falls and ill health precluded outside activity. After his health continued to deteriorate went to the Shadow Lake Hillcrest Nursing Home in Papillion, NE. Paul was well known as a raconteur of stories and party pieces.

The family of Reverend Paul Joseph White created this Life Tributes page to make it easy to share your memories.

Send flowers to the White family.