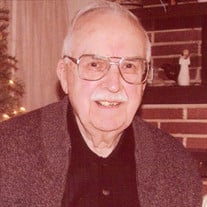 Rev. Dr. Robert "Bob" Tollefson, age 91, of Storm Lake, Iowa died on Thursday, September 6, 2018 at Methodist Manor Retirement Community in Storm Lake. A Celebration of Life Service will be held on Monday, September 17, 2018 at 11:00 a.m. at the Schaller Memorial Chapel on the campus of Buena Vista University in Storm Lake, Iowa. Robert John Tollefson was born on April 6, 1927 in Grantsburg, WI to Herbert and Karn Tollefson. He died on September 6, 2018 at the age of 91. Raised in Cloverton, MN, he graduated from high school in 1944. He served in the US Navy from 1945-46 and was in the Naval Reserves through 1956. Robert had degrees from Michigan Tech in Electrical Engineering, a Bachelor of Divinity and Master of Theology degrees from Princeton Seminary, and a PhD from the University of Iowa. Ordained in 1955 as a Minister in the Presbyterian Church, he first served small parishes, then worked on his doctorate in 17th Century British Thought with a minor in History, in order to teach. Bob married Barbara Jean Phillips on August 29, 1950. He is preceded in death by his wife Barbara in 2009, his parents, his sister Rose and his nephew Larry Peterson. He is survived by his children: Rebecca Tollefson, Columbus, OH; Elizabeth Goudschaal (Roger) Tripoli, IA; Priscilla Robinson (Dan) Storm Lake, IA; and Jeff Tollefson (Kristie) Alta, IA; grandchildren: Sara (Terry) Blessing, Grant Goudschaal, Alan Robinson and Dustin Robinson; 3 great-granddaughters – Aria, Edith and Ada; and nieces Karen Erickson and Quinita Kase. Family stretched beyond the biological bonds to embrace step-children, a former foster daughter, her daughter and granddaughter. His walk with God began in the Navy. A sailor noticed a Gideon New Testament in his pocket and invited him to join a Bible study. Bible study, memorizing scripture, Navigators, Youth for Christ and seminary grounded him in his love of Jesus. Robert taught religion and philosophy at Buena Vista (College) from 1960-1992 and then retired as professor emeritus of religion and philosophy. Upon his retirement, his children, the community of Buena Vista University, Prospect Hill Presbytery and many friends established a Tollefson Reformed Lecture Series. Many outstanding scholars participated through many years. A year sabbatical in the late 1970’s took him, Barbara, Priscilla and Jeff to Cambridge, England where he was a visiting scholar. With retirement, he and Barbara then had the opportunity to serve at Sheldon Jackson College, Sitka, Alaska, for 5 academic years. Bob was a visiting scholar and Barbara worked in the library. Bob was active in the Presbyterian Church (U.S.A.) at all levels. In the Storm Lake community he was a hospital trustee, BV County Peace Network, local area Arts Council, Advisory Council on Environmental Concerns, local public schools Citizens Advisory Council and Curriculum Committee, and Kiwanis – as a local and regional officer and member of international committees. He was a member of the American Academy of Religion; American Society of Church History; Society for the History of Technology; the Institute of Society, Ethics and the Life Sciences; Humanities and Technological Association; and National Association for Science, Technology, and Society. He was listed as an outstanding educator, was the recipient of several other professional honors and awards, wrote reviews of books and articles and was a prolific reader. The Order of Cumberland and Tollefson was established in 1994 in honor of these two professors, who taught at BV for over 30 years and during tenures of three presidents. The recognition goes to professors with exceptional service to the University. Bob yearned for a world at peace, respect and acceptance of all people. He loved to garden. He developed a deep concern for the social and environmental problems of the global village. He had an uncanny ability to prick the tranquility of undisturbed souls. He was committed to excellence, to the development of the whole person, discuss Biblical materials and awaken in students a sense of feeling and better understanding of the global village. In lieu of flowers, memorials may be made to the Robert Tollefson Memorial Fund and sent to 510 Angier Drive, Storm Lake, Iowa 50588. The Tollefson family wishes to thank you for your support and love.

The family of Rev. Dr. Robert "Bob" Tollefson created this Life Tributes page to make it easy to share your memories.

Send flowers to the Tollefson family.