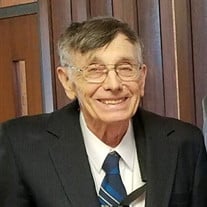 Raymond "Ray" D. Snyder, age 83, of Storm Lake, Iowa died March 11, 2022 at Methodist Manor in Storm Lake. Funeral services will be Wednesday, March 16, 2022 at 11:00 a.m. at St. Mark Lutheran Church in Storm Lake. Burial will follow in the Storm Lake Cemetery. A visitation will be held one hour prior to the service at the CHURCH. The Fratzke & Jensen Funeral Home in Storm Lake is in charge of arrangements. Ray Snyder was born on February 17, 1939, to Raymond Walter and Berniece (Graeber) Snyder in Lake City, Iowa. He was baptized and confirmed at Emanuel St. John Lutheran Church in Lytton, Iowa. He attended school at Calhoun County Williams #9 country school and went on to attend high school in Lytton, graduating in 1957. Ray served in the U.S. Army Reserves from 1957 to 1963. Ray was united in marriage to Pearl Bell; they were blessed with four children; Susan, Sandra, Donald and Carol. On June 5, 1976, Ray was united in marriage to Darlene (Moritz) Erickson in Storm Lake, Iowa. Ray enjoyed bowling in his younger years, fishing, hunting, and volunteering at the Senior Center. He will be deeply missed by all who knew and loved him. Ray is survived by his children; Susan, Sandra, Donald and Carol; Darlene’s son, Mike (Noreen) Erickson of Storm Lake, Iowa; sister, Patricia (Gordon) Andersen of Alta, Iowa; brothers: Bill (Linda) Snyder of Erie, Colorado and Ken (Judy) Snyder of Muscatine, Iowa; many grandchildren, extended family, and friends. He was preceded in death by his wife, Darlene (Moritz) Erickson, and his parents, Raymond Walter Snyder and Berniece (Graeber) Snyder.

The family of Raymond D. Snyder created this Life Tributes page to make it easy to share your memories.

Send flowers to the Snyder family.