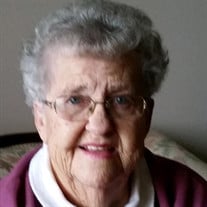 Phyllis F. Bruns, age 93, of Alta, Iowa died Friday, March 25, 2022 at the Methodist Manor Retirement Community in Storm Lake. Funeral services will take place Tuesday, March 29, 2022 at 10:00 a.m. at the United Methodist Church in Alta. Burial will be in the Woodlawn Cemetery in Alta. Visitation will take place Monday, March 28, 2022 from 5-7:00 p.m. at the Fratzke & Jensen Funeral Home in ALTA. The Fratzke & Jensen Funeral Home in Alta is in charge of the arrangements. Phyllis Fern (Holstein) Bruns was born December 10, 1928 on her parent’s farm in Nebraska to Edward and Laura (Bendorf) Holstein. She attended grade school in a small country school in Spiker, Nebraska. Her family then moved from Nebraska to Galva, Iowa in 1940. From Galva, they then moved to Alta in 1944 and Phyllis graduated from Alta High School in 1946. After graduation, she went to NBT Business College in Sioux City and from there went to Omaha, Nebraska where she worked at General Electric Company as a secretary for six months. Then she went back to Sioux City in 1947 and worked at the 1st National Bank as a bookkeeper. On September 19, 1948, she was united in marriage to Delmer Bruns at the Methodist Church in Alta. This union was blessed with four children: Gary, Douglas, Ralene and Brian. Phyllis loved helping Del with the farming. She learned to drive the tractor with a plow or disc and running the combine was her favorite. She went on to work at the Frederick Insurance Agency of Alta for over 20 years. She and Delmer also enjoyed going to Mission, Texas for 13 years in the winter. Phyllis was a member of the Methodist Church and was involved in UMW and the Circles. She taught Sunday School for a number of years. Phyllis also belonged to several neighborhood social clubs and card clubs. She loved to play cards, crochet, embroider, and dance. Those who are surviving are Gary (Sharon) of Council Bluffs, Iowa; Doug from Alta, Iowa; Rae from Waterloo, Iowa; Brian (Lori) from Del Rapids, South Dakota; twelve grandchildren: Jonathan, Leah, Tyler, Tavia, Zachery, Aaron, Jeremy, Michelle, Austin, Ashely, Amanda, and Kayla; 28 great grandchildren; and Grandma loved each and every one of them. She is also survived by her sister-in-laws: Donna Holstein from Alta, Iowa; Marjorie Holstein from Early, Iowa; and a host of nieces and nephews. Those preceding her in death were her husband, Delmer Bruns in 2013; her parents and Delmer’s parents; brothers: Chris (Susan), Ray (Helen), Don, Walter (Deloris), Gene (Betty), Marvin, and Roger (Patricia); sisters: Gladys, Ethel; her in-laws: Les (Lois), Orin (Dorothy), George Jr. (Rozella), Waldo (Hazel); daughter in-law Carolyn (Doug).

The family of Phyllis Bruns created this Life Tributes page to make it easy to share your memories.

Send flowers to the Bruns family.