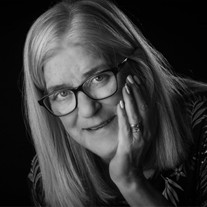 Pamela Sue Fiedler, age 64, of Storm Lake, Iowa died Tuesday, April 5, 2022 at the Sanford Hospital in Sioux Falls, South Dakota. A Celebration of Life will take place Saturday, April 9, 2022 from 3-5:00 p.m. at the Fratzke & Jensen Funeral Home in STORM LAKE. The Fratzke & Jensen Funeral Home in Storm Lake is in charge of the arrangements. Pam was born in Storm Lake Iowa, the oldest daughter of 6 children, to Donald and Darlene (Elsner) Eades on May 1st 1957. She graduated from Anita High School in 1975 before returning to Storm Lake, her lifelong home. Pam spent her early adult years as a stay at home mom with her girls before she decided to follow her dreams of becoming a nurse. After graduating from Iowa Central Community College in 1988 Pam worked as a nurse manager at Tyson for many years. She eventually found her true passion and calling when she began working with individuals with special needs. Pam retired from the nursing field having touched the lives of many children and adults through her care. It was later in life that Pam found the love of a lifetime with Ricky. Together they formed one family unit with their children Andrea, Tonya and Christopher. They were married in 2000 and spent every day since that moment living life to its fullest. They enjoyed their years spending time with their Elk’s family, going on motorcycle rides, traveling, and volunteering. Although, it didn’t matter what they did as long as they were together, “watching the green green grass of home.” Above all else Pam cherished her family. She was the family matriarch and believed in the traditions and values that were passed to her from her elders and made sure to instill them in her children and grandchildren. Her house was always filled with family and friends on the holidays, and it didn’t matter who you were, you were always welcome in her home. Pam enjoyed making memories with her grandchildren and family. You would see her at every sporting event and concert cheering her grandkids on. In the summer you would often find her riding around on the golf cart with her sister and a handful of grandkids checking on her flowers and gourds. Going to the movie theater with family was a regular event, it did not matter what the movie was, it was about the people she was with, and the popcorn. Those left to carry on her legacy are: husband, Ricky Fiedler, mother-in-law; Lavonne Fiedler, children; Andrea (Troy Hogrefe) Eades-Hogrefe, Tonya (Craig Oden) Santos, Chris (Gwen Inglis-Steinfeld) Fiedler, grandchildren; Annabelle, Logan, Craig, Sofia, Elisabeth, Madelyn, David, Blake, Andrew, Bryce, Brooklyn, Asher, Walter, siblings; Pat Mauch, Debra Darshan, Charles (Stacia) Eades, Suzanne (Dennis Thorp) Eades, in-laws; Ronnie Weiss, Donna (Paul) Feller, Gary (Barb) Fiedler, John DeMan, Bonnie (Chuck) Hahn, Loren (Julie) Fiedler, Gus (Sheila) Fiedler, Floyd (Deb) Fiedler, Gail (Steve) Thill, Carl (Lisa) Fiedler, John (Shannon), Twyla (Todd) Lindsey, Todd (Sara) Fiedler, Jamie (Becky) Fiedler, and numerous other relatives and friends. Pam was preceded in death by her parents, Donald and Darlene Eades, brother; Craig Eades, in-laws; Dennis Mauch, Vicki DeMan, and nephew; Elliott Donald Eades. In lieu of flowers, donations may be made in her memory to Special Olympics, Camp High Hopes or another organization that supports individuals with special needs.

The family of Pamela Fiedler created this Life Tributes page to make it easy to share your memories.

Send flowers to the Fiedler family.