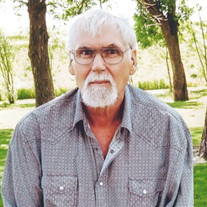 Michael Degner, age 62, of Albert City, Iowa died on Friday, July 5, 2019 at his home in Albert City, Iowa. Funeral services will be held on Tuesday, July 9, 2019 at 2:30 p.m. at the United Methodist Church in Varina. Burial will be in the Varina Cemetery. Visitation will take place on Monday, July 8, 2019 from 4:00-8:00 p.m. at the CHURCH. The Mahaney Funeral Home in Fonda is in charge of the arrangements. Michael Frederick Degner, the son of Frederick and Thelma (Erickson) Degner, was born on April 8, 1957 in Storm Lake, Iowa. He was baptized as an infant and later confirmed at St. John’s Lutheran Church in rural Albert City. He attended Albert City-Truesdale where he graduated in 1975, it was here that he met his high school sweetheart after she asked him for a ride in his 1972 Camaro. He married that sweetheart, Melody Lee McVinua-Lynn, on July 24, 1975 at St. John’s Lutheran Church in rural Albert City. The couple started their married life on the farm where they lived until 1989. After moving the family off the farm, Michael began trucking as a full time owner/operator. Upon his father’s retirement, Michael returned to the farm. “Once a farm boy, always a farm boy”. Michael never gave up on his dream of returning to the family farm. He shared this joy with his wife in seeing their son farming and all of the grandchildren coming out and teaching them to love the life of farming. Michael never thought of farming as a job but as a lifestyle; this is what he passed down to his children and grandchildren. This joy is what makes life worth living. Mike was active in his community as a volunteer fireman and EMT-D for Albert City. Mike came home to Varina Methodist Church in July of 2018. He has served as vice president of the Varina Cemetery board and a trustee for the Varina Methodist Church. In his free time, Mike enjoyed woodworking where he built a house, cabinets, furniture, and things for his family. Mike also loved Nascar races, grilling, motorcycles and camping with his family. Any time spent with family, whether it was working together or just enjoying life with them, was good. Those left to cherish his memory include his wife, Melody Degner of Albert City, Iowa; children: Leigh (Jason) Schultz of Albert City, Iowa; Misti (Carlos) Garcia of Pocahontas, Iowa; Michael (Laura) Degner Jr. of Newell, Iowa; grandchildren: Chelsey Schultz, Nathaniel Schultz, Robert Grant Jr., Antonio Garcia, Gregorio Garcia, Jorden Degner, and Peyton Degner; sisters, Lucinda (Bill) O’Neall and Suzanne (Dan) Shold; Josh Holt (who was like a son to Michael) and extended family and friends. Michael was preceded in death by his parents, Freddie and Thelma Degner; brother, Ron Degner; grandparents: Fred and Arvilla Degner; Willis and Sophie Erickson; father-in-law, Roger McVinua and step-mother-in-law, Carolyn McVinua; brother-in-law, Terry Lynn; and numerous aunts and uncles.

Michael Degner, age 62, of Albert City, Iowa died on Friday, July 5, 2019 at his home in Albert City, Iowa. Funeral services will be held on Tuesday, July 9, 2019 at 2:30 p.m. at the United Methodist Church in Varina. Burial will be in the... View Obituary & Service Information

The family of Michael Degner created this Life Tributes page to make it easy to share your memories.

Send flowers to the Degner family.