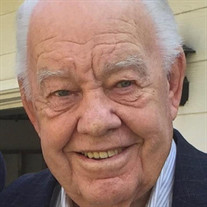 Merritt A. Ewalt, Jr., age 90, died at his home in Storm Lake on Tuesday, September 22, 2020 after a brief illness. at his home in Storm Lake. There will be no services at this time. The Fratzke & Jensen Funeral Home in Storm Lake is in charge of the arrangements. Merritt was born on July 1, 1930 in Iowa City, IA and was the son of Merritt A. Ewalt and Trula Mae Kelley of Coralville, IA. He was the first of five children. Merritt graduated from University High School in Iowa City where he was a state champion pole vaulter, and then earned a B.A. in Education and Industrial Arts from Iowa State Teacher’s College (now University of Northern Iowa) in 1952. Drafted into the U.S. Marine Corps that year, Merritt served at Camp Pendleton during the Korean conflict. Later, Merritt went on to complete his education earning an M.A. degree in Physical Education from Wayne State University. On June 16, 1952 Merritt was united in marriage to Mareda Mae Hansen of West Branch, IA. Together they had two sons, Steven and Darrell. In 1957 Merritt and Mareda made a home in Storm Lake and Merritt began teaching and coaching at Buena Vista College (now Buena Vista University). During his time at B.V., Merritt coached football, basketball, track, wrestling, and golf, earning conference championships in basketball and golf. Notably, Merritt lead his basketball team to two N.A.I.A. tournaments in Kansas City. In 2005, Merritt was inducted into the Buena Vista University Hall of Fame for outstanding coaching. The door was always open at the Ewalt household for Merritt’s players and students when they wanted to talk to “Coach”. Merritt followed the athletic careers of many of his former players over the years, helping create great memories for scores of his former athletes. Always with a good story to share about the ups and downs of athletic competition, Merritt could go on through the evening, recalling names and events from the past. His recall of facts, scores, games and personal life details of both players and fellow coaches was astounding. Merritt loved hunting, fishing and golf, passing these passions on to his family. Merritt was still watching Steve’s hunting dog (Dutch) work during last year’s pheasant season, supplying the hunters with coffee and his homemade cookies. In fact, just two weeks prior to Merritt’s passing, he had a triple batch of oatmeal raisin cookies in the oven, testing a new recipe. He was a long-time member of St. Mark Lutheran Church. Above all, Merritt cherished time with his wife and with his two sons, enjoying visits wherever their careers took them. Merritt’s grandchildren were a source of pride and joy to him. Those left to cherish his memory include his son, Steve (Wendy) Ewalt of Storm Lake; daughter-in law, Vicky Collins Ewalt of Denver, CO; sister, Margaret Crowley of West Liberty, IA; grandchildren: Kyle and Blair Ewalt of Denver, CO; step-granddaughter, Morgan Gates of Cardiff-by-the-Sea, CA; and nieces and nephews. Merritt was preceded in death by his parents; his wife of nearly 68 years, Mareda; his son, Darrell Ewalt; his sister, Marilyn Andrews; and his brothers: Ralph Ewalt and Robert Ewalt.

The family of Merritt A. Ewalt Jr. created this Life Tributes page to make it easy to share your memories.

Send flowers to the Ewalt family.