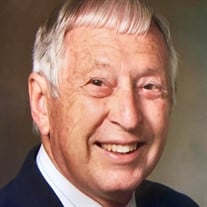 Melvin Suhr, age 89, of Storm Lake, Iowa died October 22, 2018 in Sioux City, Iowa. Memorial services will be held Friday, October 26, 2018 at 10:00 a.m. at St. Mark Lutheran Church in Storm Lake. Burial service will be held on Friday, October 26, 2018 at Fremont Lutheran Church in rural Essex, Iowa at 4:00 p.m. with inurnment in Mount Hope Cemetery in rural Essex, Iowa. Visitation will take place Thursday, October 25, 2018 from 5-7:00 p.m. at the Fratzke & Jensen Funeral Home in STORM LAKE. In lieu of flowers, the family requests memorials be given to Lutheran Lakeside Camp, 2491 170th St. Spirit Lake, Iowa 51360 or Companion Synod c/o Western Iowa Synod, 318 E 5th St. Storm Lake, Iowa 50588. The Fratzke & Jensen Funeral Home in Storm Lake is in charge of the arrangements. Melvin Carl Suhr, the son of Carl and Lillie (Eck) Suhr, was born on December 24, 1928 in Wausa, Nebraska. Melvin was baptized, confirmed, and raised in the Lutheran faith. Mel attended grade school in Wausa and graduated from Bloomfield High School in 1946 in Bloomfield, Nebraska. He furthered his education after high school at Luther College and Dana College, both in Nebraska. Melvin graduated with his degree in Theology in 1958 from Augustana Seminary in Rock Island, Illinois. On June 22, 1963, Mel was united in marriage to Carole Quitno in Rockford, Illinois. The couple was blessed with two children, Phillip and Martha. Mel served as pastor of First Lutheran Church in Centerville, Iowa for 14 years and 28 years at Fremont Lutheran in Red Oak, Iowa. During that time, he also served Tabor Lutheran in Stanton, Iowa for 16 years. He was a member of a Synod board, President of the Lutheran Lakeside Bible Camp Board, President of the Iowa Luther League, and volunteered with 4-H, Boy Scouts and Girl Scouts. He had a special love for St. Mark’s Companion Congregation, Lupembe Lutheran Parish in Tanzania. In his free time, Mel loved travelling, camping, hiking and photography. He travelled to all 50 states, Tanzania, and Switzerland. He developed a strong love for nature through photography. Some of his photos even won awards and he would show his photographs at nursing homes. Those left to cherish his memory include his wife of 55 years, Carole of Storm Lake, Iowa; his children, Phillip Suhr and Martha (Robert) Miller both of Naples, Florida; brothers: Ken (Dee) Suhr of Cottonwood, Arizona; Vernon (Mardell) Suhr of Miltona, Minnesota; Robert (Sue) Suhr of Lockhaven, Pennsylvania; grandchild, Chelsey (Chris) Weech of Chicago, Illinois; AFS son, Martino (Ilir) Stierli of New York City, New York; and his nieces and nephews who held a special place in his heart. Mel was preceded in death by his parents and step-mother, Isa Holst Suhr

The family of Melvin Suhr created this Life Tributes page to make it easy to share your memories.

Send flowers to the Suhr family.