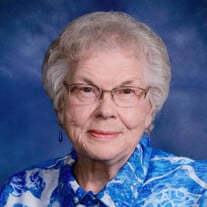 Mavis Schumann, age 88, of Newell, Iowa passed away peacefully on Saturday, January 29, 2022 at the Methodist Manor Retirement Community in Storm Lake, Iowa. Funeral services will take place Friday, February 4, 2022 at 10:00 a.m. at the United Methodist Church in Varina. Burial will be in the Varina Cemetery. Visitation will take place Thursday, February 3, 2022 from 5-7:00 p.m. at the Fratzke & Jensen Funeral Home in STORM LAKE. In lieu of flowers, memorials may be directed to Hillcrest Family Services: 2005 Asbury Road Dubuque, Iowa 52001 in Mavis' name. The Fratzke & Jensen Funeral Home in Storm Lake is in charge of the arrangements. Mavis Marlene Caboth was born March 28, 1933 in Aurelia, Iowa the daughter of Herman and Catherine (Goettsch) Caboth. As an infant, she was baptized and later confirmed. Growing up, Mavis attended country school until sixth grade and then graduated from Aurelia Consolidated School in 1950. On June 27, 1954, Mavis was united in marriage to Marlyn Dale Schumann at the United Methodist Church in Storm Lake, Iowa. Together, they lovingly adopted four children to call their own: Dale, Marlys, Drew, and Marlene. Mavis was an active member of the United Methodist Church in Varina where she faithfully served as a Sunday School teacher, belonged to the United Methodist Women and was on the Worship Chair. She was also a member of Coon Homemakers, Buena Vista County Homemakers, Varina American Legion Auxiliary, Red Hat Ladies and served as a Newell Pepperettes 4-H Club leader. Mavis enjoyed sewing, quilting, painting, baking and her flower garden. She was known for her family Kuchen that she made every Christmas along with other goodies to share with family and friends. Genealogy was a favorite pastime of hers and she truly enjoyed the history with it. She loved playing cards and attending card club. Mavis was a homemaker for many years working alongside her husband, Marlyn, on the farm and raising their children. She took pride in her family and always put them first. Her children, grandchildren and great grandchildren were her pride and joy. Mavis will be remembered as a loving and devoted mother, grandmother, great-grandmother, aunt, neighbor, and friend. She will be deeply missed by all who knew and loved her. Those left to cherish her memory include her children: Dale (Jayne) Schumann of Lakeside, Iowa; Marlys (Tim) Elliott of Seymour, Texas; Drew (Ellen) Schumann of Clarksville, Tennessee; and Marlene Schumann of Bozeman, Montana; grandchildren: Jennifer (Chad) Hustedt of Alta, Iowa; Nathan (Natalie) Schumann Albert City, Iowa; Kelani (Josh) Pavlisko of Manhattan, Kansas; Kate (Geoff) Bryant of Murfreesboro, Tennessee; and Sada Schumann of Bozeman, Montana; great grandchildren: Paisley, Presley and Grady Hustedt; Maggie Bryant; and Wyatt Schumann; brother, Desel Caboth of Kelley, Iowa; sister-in-law, Joanne Schumann of Albert City, Iowa; nieces, nephews, cousins, extended family and many friends. Mavis was preceded in death by her husband, Marlyn Schumann; parents, Herman and Catherine Caboth; sisters: Darlene (Vere) Corrington; Alverda (Adrian) Kline; sister-in-law, Sallie Caboth; and three brothers-in-law: Frederick, William and Darrell Schumann.

The family of Mavis Schumann created this Life Tributes page to make it easy to share your memories.

Send flowers to the Schumann family.