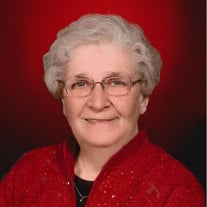 Mary Ruth (Hase) Stille, age 81, of Storm Lake, Iowa died Saturday, November 3, 2018 in Storm Lake. Celebration of Life Service will be held on Friday, July 12, 2019 at 11:00 a.m. at the United Methodist Church in Alta. Burial will be in the Schaller Cemetery in Schaller. Visitation will take place prior to the service starting at 9:30 a.m. at the church. The Fratzke & Jensen Funeral Home in Storm Lake is in charge of the arrangements. Mary Ruth (Hase) Stille was born January 16, 1937 in Sac County, Iowa, the daughter of Paul James Hase and Grace Alice (Bloyer) Hase. Mary attended and was a member of Schaller United Methodist Church in Sac County, Iowa and later Alta United Methodist Church in Buena Vista County, Iowa. She attended school at Schaller High School, graduating in 1954. She went on to receive a certification in book keeping. On December 28, 1958, Mary was united in marriage to Howard Eugene Stille at the United Methodist Church in Schaller. Together they were blessed with three children: Randall, Karyn, and Sharyn. Mary worked at the Schaller Pop Corn Company in the book keeping department prior to marriage, and then as a farm wife for many years. She later kept books for Taylor Contracting, Inc. in Storm Lake, Iowa. Mary and Howard started Stille Turkey Farm in the late 1980s, which they worked together to build and run until retirement. Mary spent her life devoted to her husband, children, and family. She worked long hours beside her husband and attended all her children’s sporting and fine arts events. Family was very important to Mary, and she did not hesitate to offer help and support to her extended family whenever possible. Mary was also an avid sports fan. She loved attending local sporting events and watching the Iowa State Cyclones and Duke Blue Devils, as well as the New York Yankees with Howard. She was a cheerleader and played basketball in high school and later was part of a championship bowling team. As a homemaker, Mary loved to sew. She sewed clothes for her children and later became very interested in quilting. She made special quilts for Howard and each of her children as well as several more over the years for her family and also for neighbors and friends. A highlight for her was attending the International Quilt Festival in Houston, Texas in 1995 where she met one of her quilting idols, Jinny Beyer. Another passion of Mary’s was her flowers and garden. She spent countless hours in the greenhouse growing seedlings to plant in her garden as well as for others to enjoy. She enjoyed obtaining and growing specimen and heirloom plants in her gardens. She also liked puzzles and playing cards and was an avid bird watcher. Most of all, Mary was a devoted and caring daughter, wife, mother, grandmother, sister, and friend to many. She will be deeply missed by all who knew and loved her. Those left to cherish her memory include her daughters: Karyn (Dan) Waites of Storm Lake, Iowa; Sharyn (Rob) Kitto of Richmond, Texas; grandchildren: Jolene and Sara Stille of Highlands Ranch, Colorado; Ryan and Katie Kitto of Richmond, Texas; Joshua and Cassidy Parks of Storm Lake, Iowa; brother: Frank (Kay) Hase of Eagle Rock, Missouri; sisters-in law: Dorothy (Melvin) Ploeger of Ida Grove, Iowa; Jeanette (Don) Carter of Edmond, Oklahoma; Arletta Stille (surviving spouse of Kenneth Stille) of Sac City, Iowa; Mary E. Stille (surviving spouse of Donald Stille) of Schaller, Iowa; Connie Stille (surviving spouse of Richard Stille) of Storm Lake, Iowa; many nieces and nephews, extended family and many close neighbors and friends. Mary was preceded in death by her parents; husband Howard; son Randy; sisters: Frances (Hase) Rush, Adella (Hase) Schroth; brothers: Vernon (Marlyn) Hase; Robert (Berdena) Hase; Kermit (Alma) Hase; and George (Bonnie) Hase; brothers-in-law: Donald Stille, Richard (Donna Jean) Stille, Kenneth Stille, Marvin (Marlene) Stille, and Russell (Pat) Stille.

Mary Ruth (Hase) Stille, age 81, of Storm Lake, Iowa died Saturday, November 3, 2018 in Storm Lake. Celebration of Life Service will be held on Friday, July 12, 2019 at 11:00 a.m. at the United Methodist Church in Alta. Burial will be in the... View Obituary & Service Information

The family of Mary R. Stille created this Life Tributes page to make it easy to share your memories.

Send flowers to the Stille family.