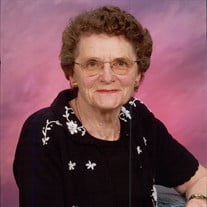 Marlys Fay (Miller) Marshall passed away at the age of 87 on April 19th, 2019 in the Buena Vista Regional Medical Center in Storm Lake, Iowa, surrounded by her family. Funeral services will take place Wednesday, April 24, 2019 at 10:30 a.m. at Grace Lutheran Church in Storm Lake, Iowa. Burial will be in the Buena Vista Memorial Park Cemetery in Storm Lake. Visitation will take place Tuesday, April 23, 2019 from 5-7:00 p.m. at the Fratzke & Jensen Funeral Home in ALTA. The Fratzke & Jensen Funeral Home in Alta is in charge of the arrangements. Marlys was born on February 5, 1932, on her parents’ farm north of Hanover. Walter and Esther (Lietz) Miller notified the doctor, and he arrived by horse-drawn sleigh to deliver Marlys. She was baptized at St. John’s Lutheran Church in Hanover. Marlys was confirmed at St. Paul Lutheran Church in Alta. Throughout high school, she was a baton twirler, drum majorette and played piano, the accordion and cornet. She graduated from Alta High School in 1949 and from AIB in Des Moines in 1950. She was then employed by Carr and Moehl as an executive secretary. Marlys married Paul Marshall of Monroe, Iowa, on June 17, 1951 at St. Paul Lutheran Church in Alta. They lived and worked in Des Moines until they moved to a farm south of Alta in 1955. Their marriage was blessed with four children. Marlys and Paul farmed the rest of their working years. Marlys was very involved in the farm operation, helped take care of the livestock, and helped plant and harvest crops. They moved to the town of Alta in 1990. They were recognized for having a Century Farm in 1997. Marlys was resourceful and multitalented. She would frequently be found gardening, baking, sewing, upholstering, refinishing furniture and repurposing things. She enjoyed going to garage sales, traveling, collecting dolls, attending her grandchildren’s activities and keeping up with her extended family. Marlys was an active member of Grace Lutheran Church in Storm Lake for over 64 years. Her faith was very important to her. She was a resident of Wel-Life in Alta since 2014 and considered it her second home. Marlys was preceded in death by her husband Paul in 1997; her parents; father-in-law and mother-in-law, Hubert and Flossie Marshall and brothers-in-law and sisters-in-law, Herb and Betty Marshall and Edward and Catharine Johnson. Marlys leaves a loving family of children, Steven Marshall of Alta, Barbara (Mike) Henning of Waterloo, Richard (Nancy) Marshall of Alta and Sandra (Greg) Sextro of Manning; grandchildren, Wade Henning, Kim Henning, Kevin (Jeni) Marshall, Leah (Matt) Schimmer, Neil Marshall, Katie Sextro and Grace Sextro; nine great grandchildren; a brother, Al “Dusty” Miller and his wife Sue Schlingman of Arizona/Colorado and numerous cousins, nieces and nephews.

The family of Marlys F. Marshall created this Life Tributes page to make it easy to share your memories.

Marlys Fay (Miller) Marshall passed away at the age of 87 on...

Send flowers to the Marshall family.