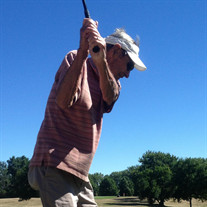 Mark L. Kelly, age 97, of Fonda, Iowa died on Saturday, February 1, 2020 at Loring Hospital in Sac City, Iowa. Funeral Mass will be held on Wednesday, February 5, 2020 at 10:30 a.m. at Our Lady of Good Counsel Catholic Church in Fonda. Burial will be in the Mt. Zion Cemetery in Fonda. Visitation will take place one hour prior to the service at the CHURCH. In lieu of flowers, the family requests that memorials be given to St. Jude Children's Hospital: 501 St. Jude Place Memphis, Tennessee 38105 or UnityPoint Hospice: 214 S 25th St. Fort Dodge, Iowa 50501. The Fratzke & Jensen Funeral Home in Storm Lake is in charge of the arrangements. Mark was born on January 8th, 1925 to T.D and Tress Kelly. He was baptized into the Catholic faith at O.L.G.C. church and continued his Catholic education at Loras College in Dubuque. He married married Regina (O’Brien) and had three children, Deb, Tim and Joe. A man of talents and endless enthusiasm, he believed his greatest achievement was his family. In his final days, he was surrounded by a constant presence of not only children, but grandchildren, great grandchildren, nieces and nephews, all of whom had a special and cherished relationship with him. Mark’s name was synonymous with golf. A steward of the land in the field and on the fairway, there are few (successful) area golfers whose stance hadn’t been guided into place with his keen eye and a gentle tap from his club. Until just a few summers ago, he routinely beat golfers half as young – or younger – than himself and is one of the few golfers who can boast multiple holes-in-one. A text from a lifelong friend shared a text with the family. “I’m sure Heaven’s thrilled. Your Dad was a class-act and will be missed. I picture him on a golf course, happy and with your Mom.” Nothing made him prouder than watching – and sharing – the athletic exploits of his grandchildren and great grandchildren, frequently recounting their exploits to audiences both willing and captive. Shortly before passing, Mark was able to experience several grandparent’s milestones: a Walker-Walker-Walker trifecta on the basketball court, and great granddaughter presenting him with her first championship gymnastics medal as they listened to the announcer comment that the 9.9s he was reading was a rare moment in his career. Mark was preceded in death by his wife, Regina, parents Daniel and Teresa (Tres) (Lilly), siblings Robert, Thomas (Ed), Charles, Josephine Bartley, Ellen (Annie) Curran, Katherine McCabe and Liz Baskerville. Left to cherish his memory are his children Tim Kelly, wife Tammy and children Zack and Jenny, Deb Gruntorad, husband Joe and children Courtney Walker, Kelly Simpson, Kristen Peterson, Erin and Ellen Gruntorad; and son Joe. Twelve great grandchildren were lucky enough to spend lots of time with him. Mark was a lifelong supporter of the American Cancer Society and St. Jude’s Children’s Hospital. He noted that as the beneficiary of a long, healthy life, it was his duty to support the youngest who were struggling with cancer. In lieu of flowers, the family requests donations be made to his preferred charities or UnityPoint Home Care and Hospice. Dapper and charming, Mark was known for his sharp sense of humor and was always funny, poignant and knew that life’s deeper truths always require a laugh. And a bowl of ice cream. His memory will live on in the hearts of his children, grandchildren, great grandchildren and those who knew him well.

The family of Mark L. Kelly created this Life Tributes page to make it easy to share your memories.

Send flowers to the Kelly family.