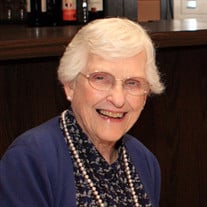 Marjorie Hunzelman, age 95, of Storm Lake, Iowa died on Sunday, November 4, 2018 at Methodist Manor Retirement Community in Storm Lake. Funeral services will be held on Thursday, November 8, 2018 at 11:00 a.m. at the United Methodist Church in Storm Lake. Burial will be in the Storm Lake Cemetery. Visitation will take place one hour prior to the service at the church. The family encourages everyone who attends the funeral to wear red clothing. In lieu of flowers, memorials may be directed to the United Methodist Church, 211 E. 3rd St. Storm Lake, Iowa 50588; or the Hunzelman Scholarship c/o Buena Vista University, 610 W. 4th St. Storm Lake, Iowa 50588. The Fratzke & Jensen Funeral Home in Storm Lake is in charge of the arrangements. Marjorie Elizabeth Murray Hunzelman was born in Buffalo Center, Iowa, on December 24, 1922, to Ray Murray and Viola Wise Murray. She lived on the family farm near Buffalo Center until 1932 when the family moved to Des Moines after her father was elected Secretary of Agriculture for the State of Iowa. She graduated from Roosevelt High School in Des Moines in 1940 and earned a degree in journalism from Drake University in 1944. While attending Drake she was a member of Delta Gamma sorority and was the first woman to be elected Student Body President. She married Willard James (Bill) Hunzelman on December 23, 1943, in Des Moines. They had a very brief honeymoon since Bill had to report to his ship (USS Murray) in January. Following college graduation she moved to California on the assumption that when the Murray, assigned to the Pacific fleet, returned to the US it would be to California. The Murray was in San Francisco for overhaul in December 1944 and she and Bill were able to spend Christmas together. After World War 2 she and Bill lived in Des Moines where all three of their children were born. The family moved to Storm Lake in 1952 when Bill opened his CPA practice. She was very active in the Storm Lake United Methodist Church and was a Cub Scout and Girl Scout leader. In the 1960’s she became the city librarian for Storm Lake and was the librarian when the old Carnegie Library (now Santa’s Castle) was closed and the new library constructed. She and Bill helped start what is now the 4th of July Star Spangled Spectacular. They were the commodores for several years and involved with fund raising for the Spectacular for many years. She was also active in many organizations in Storm Lake including United Methodist Women, PEO, American Association of University Women, Questers and several bridge clubs. She is survived by her son, Murray James (Lynn) Hunzelman of Dallas, Texas, her sister, Madelon (Andrew) Regis of Pamona, New York, her daughter-in-law Katherine Jane Hunzelman of West Des Moines, Iowa, six grandchildren, twelve great grandchildren and several nieces and nephews. She was preceded in death by her husband, Bill, her daughter Karen Elizabeth Hunzelman, her son Marshall John Hunzelman and her brother Charles John Murray.

The family of Marjorie Hunzelman created this Life Tributes page to make it easy to share your memories.

Send flowers to the Hunzelman family.