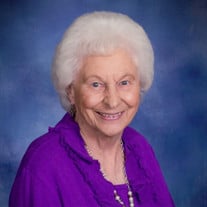 Marian Mae Kjolhede, 93, of Storm Lake, Iowa passed away peacefully on February 28, 2022, at Wel-Life in Alta, Iowa. Memorial services will be held Saturday, April 30, 2022 at 1:00 p.m. at Trinity Lutheran Church in Alta. Burial will be in the Scandinavian Cemetery in Alta. The Fratzke & Jensen Funeral Home in Storm Lake is in charge of arrangements. Marian Mae Kjolhede, daughter of Fred and Mary Fett Grunig, was born on March 12, 1928 in Storm Lake, Iowa. Marian received her education from Grant #8, Sulphur Springs and was a Storm Lake graduate in 1945. She was baptized on March 25, 1928 and confirmed on June 14, 1942 both at St. Johns Lutheran Church. She married Arnold C. Kjolhede of Alta on March 2, 1947 at St. John’s Lutheran Church. To this union, 4 children were born. Marian was a member of Trinity Lutheran Church in Alta all her married life serving in many capacities. She worked outside her farm home for 17 ½ years as a Federal Government employee working for the Dept. of Agriculture and then as an Agent for the Federal Crop Insurance in Buena Vista County. Arnold and Marian sold their acreage and moved to their Storm Lake condo by the lake in 2002. Marian relocated to Wel-Life Assisted Living in 2015. She passed away on February 28, 2022 reaching the age of 93 years 11 months and 16 days. She was preceded in death by her parents, her husband, one daughter: Jan Keith, two brothers: Roy Grunig and Lester Grunig, and two sisters: Ellen Huen and Lorna Forsberg. Marian is survived by her son: Luther Kjolhede of Loveland, CO, her daughter and husband: Candis and Joel Lichtenberg of Delmar, DE, and her son and wife: Jeff and Laurie Kjolhede of Ankeny, IA, 15 grandchildren, 37 great grandchildren, and 2 great-great grandchildren. She also leaves a host of other relatives and friends.

Marian Mae Kjolhede, 93, of Storm Lake, Iowa passed away peacefully on February 28, 2022, at Wel-Life in Alta, Iowa. Memorial services will be held Saturday, April 30, 2022 at 1:00 p.m. at Trinity Lutheran Church in Alta. Burial will be in... View Obituary & Service Information

The family of Marian Mae Kjolhede created this Life Tributes page to make it easy to share your memories.

Send flowers to the Kjolhede family.