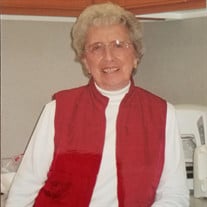 Madonna Strait, age 91, of Storm Lake, Iowa died April 17, 2020 at Methodist Manor Retirement Community in Storm Lake. Memorial services will be held at a later date. The Fratzke & Jensen Funeral Home in Storm Lake is in charge of the arrangements. Madonna (Fitzgerald) Strait, a devoted wife and mother, and a long-time resident of Storm Lake, Ia. died Friday, April 17th at Methodist Manor nursing home at the age of 91, after enduring dementia for the past four years. Madonna was born on the family farm on April 11th, 1929, the daughter of James D. and Helen Fitzgerald in Clare, Ia. She was the youngest of five and had a lovely childhood on the family farm with her horse, gardening and school dances. She graduated from St. Matthews Catholic High School in Clare and received her teaching certificate from Clark College in Dubuque, Ia. She started her teaching career in the Clare Public School in 1949. She married her childhood sweetheart, Leo Strait on October 20th, 1952 at St. Matthews Catholic Church in Clare, Ia. Madonna worked as a teacher until she started raising her own family, staying at home to care for them, and teaching them how to be kind, responsible, and respectful. When her children became school age, she began substitute teaching, and was lucky enough to sometimes even have them in class. She was a life-long member of the Catholic Church, attended St. Mary’s in Storm Lake when the family moved there in 1973, and was a member of St. Mary’s Ladies Guild. She also worked for a time at Buena Vista Stationary and volunteered at St. Mary’s S.O.S. store. Beginning in 1995, Leo and Madonna became snowbirds spending half of every year in Florence, Arizona where they were able to enjoy activities such as golfing, dancing, and enjoying the warm weather and beautiful nature. She is survived by her husband of 67 years Leo W. Strait, and all 4 of her children, Cindy (Rick) Weaver of St. Peters, Mo., Deb Strait of Eugene, Or., Randy (Carol) Strait of Sioux City, Ia., and Mike Strait of Tucson, Az. She is also survived by 7 grandchildren (Emily Lewis, Carrie Rife, Jenny Weaver, Tim Hofferber, Christina Fox, Steven Strait, Patrick Strait) and 16 great-grandchildren (Ryan Crockett, Max Weaver, Jace Lewis, Caleb Rife, Daisy Rife, Lily Rife, Eli Rife, Sydney Bernard, Naomi Hofferber, Isaac Hofferber, Connor Fox, Chloe Fox, Casey Fox, Cora Fox, Cooper Strait, and Nolan Strait) and a sister-in-law Peggy Fitzgerald of Rockwell City, Ia. She was preceded in death by – James D. and Helen Fitzgerald of Clare, Ia. and her 3 brothers and 1 sister (James M. Fitzgerald, Delores (Milton) Andersen, Robert (Lois) Fitzgerald, and Leo Fitzgerald.

The family of Madonna Strait created this Life Tributes page to make it easy to share your memories.

Send flowers to the Strait family.