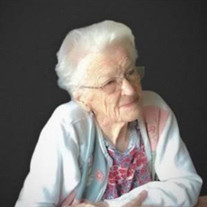 Louise Gingerich, age 99, of Storm Lake, Iowa died on March 14, 2022 at the Methodist Manor Retirement Community in Storm Lake. Funeral services will take place Saturday, March 19, 2022 at 11:00 a.m. at Grace Lutheran Church in Storm Lake. Burial will be in the Storm Lake Cemetery. Visitation will take place one hour prior to the service at the CHURCH. Cards to the family may be sent to Lyle Gingerich, 6693 Eagle Ridge Drive, Johnston, Iowa 50131. Memorials may be sent to Grace Lutheran Church, 1407 West 5th Street Storm Lake, Iowa 50588. The Fratzke & Jensen Funeral Home in Storm Lake is in charge of the arrangements. Louise was born on the family farm near Lotts Creek on September 10, 1922 to Arthur and Emma (Ohm) Dreyer. She was baptized and confirmed in the Lutheran faith and graduated from Fenton High School. She was united in marriage to Lester Gingerich on October 13, 1940 at St. John’s Lutheran Church in Fenton, Iowa. They lived in several north Iowa communities before moving to Storm Lake, then Mason City, returning to Storm Lake in 1964. Louise was an enthusiastic gardener and talented quilter. She was an active member of Grace Lutheran Church, the Garden Club, and taught English as a Second Language. Her love of helping others will be remembered as well as her laughter when gathering with family and friends. Louise enjoyed playing cards, especially “500” and bridge with lifelong friends and co-workers at J.C. Penney’s. An avid reader, she also enjoyed doing crossword puzzles and jigsaw puzzles. Louise showed her daring spirit, when at age 76, she flew in a hot air balloon. Louise is survived by 5 of her children, including Jeannette (Kent) Babcock, Urbandale; Beverly (Chuck) Clapsaddle, Clear Lake; Lyle (Diane) Gingerich, Johnston; Mary Lou (Dennis) Chappell, Rosemount, MN and Barbara Gingerich, Storm Lake; 9 grandchildren; 20 great-grandchildren and 3 great-great grandchildren. Also one sister, Emilyn Kitner, Clear Lake, and several nieces and nephews. She was preceded in death by her husband, Lester (1984), one daughter Ann (Gary) Vanora (2020), 2 grandchildren and a great grandson. The family wishes to express appreciation for the kind and gracious care at Lake Pointe Villa and MMRC.

The family of Louise Gingerich created this Life Tributes page to make it easy to share your memories.

Send flowers to the Gingerich family.