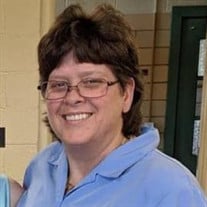 Linda J. Clark, age 51, of Early, Iowa died March 10, 2020 in Sioux City, Iowa. Funeral Mass will take place Saturday, March 14, 2020 at 10:30 a.m. at Sacred Heart Catholic Church in Early. Burial will be in the Lake City Cemetery. Visitation will take place Friday, March 13, 2020 from 4-8:00 p.m. at the Fratzke & Jensen Funeral Home in SCHALLER with a rosary at 8:00 p.m. The Fratzke & Jensen Funeral Home in Schaller is in charge of the arrangements. Linda J. Holle was born April 3, 1968, in Guthrie Center, Iowa, the daughter of William and Charlotte (Moore) Holle. As an infant, Linda was baptized on April 21, 1968, at St. Mary’s Catholic Church in Guthrie Center. Her godparents were Bill and Norma Springer. As a child, Linda had open heart surgery in Iowa City, returning home on her 5th birthday. She received 1st Communion on April 25, 1976, and was later confirmed on November 5, 1981. Her confirmation sponsor was her oldest sister, Carolyn. Linda attended school in Guthrie Center where she graduated in 1986. She was active in sports during her school years, participating in basketball, volleyball, and softball. She also played the clarinet in band. Linda participated in county 4-H showing rabbits and dairy cattle. Through her involvement in 4H, Linda developed a love for crafting. Following high school graduation, Linda attended Northwest Missouri State for one year. In 1996, Linda graduated from the Iowa Central Nursing program. On June 5, 1987, Linda was united in marriage to her high school sweetheart, Scott Clark, at St. Mary’s Catholic Church in Guthrie Center. Together, they were blessed with four children: Amanda, Abigail, Anthony and Adam. Linda was unselfish with her time as a volunteer. She was a girl scout leader, a CCD leader, a guild member, and was heavily involved with 4-H. She enjoyed being outdoors especially camping, fishing, gardening, and landscaping. In her spare time, Linda also loved various types of crafting including sewing, quilting, woodworking, and metal work. Some of her other hobbies included making flower arrangements, canning tomatoes or jam, and reading. Linda treasured spending time with her family always attending events with her children. Linda truly enjoyed helping others and was a compassionate nurse serving the area for the past 25 years. She worked the majority of her career at the BV Manor and spent the last 6 years working as a hospice nurse. Those left to cherish her memory include her husband, Scott Clark of Early, Iowa; daughters, Amanda Sue (Jay) Vreeland of Muscatine, Iowa, with one grandchild on the way, and Abigail Marie Clark of Spencer, Iowa; parents, Bill and Charlotte Holle of Guthrie Center, Iowa; brothers, Jim (Richelle) Holle of Oskaloosa, Iowa and Art (fiancé, Hannah Murry) Holle of Exira, Iowa; sisters, Carolyn (Don) Schwartz of Bayard, Iowa, Janet (Dan) Barrett of Rockwell City, Iowa, Kim (Terry) Betts of Coon Rapids, Iowa; mother-in-law, Sue Terry of Early, Iowa; father-in-law and stepmother-in-law, Duane and Janet Clark of Guthrie Center, Iowa; nieces, nephews, extended family, and many friends. Linda was preceded in death by her son, Anthony and infant son, Adam; and stepfather-in-law, Daryl Terry. Linda will be forever cherished as a wife, mother, daughter, sister, and friend. She was an honest, strong willed, and hardworking person and will be remembered as being patient and caring. She will be deeply missed by all who knew and loved her.

The family of Linda Clark created this Life Tributes page to make it easy to share your memories.

Send flowers to the Clark family.