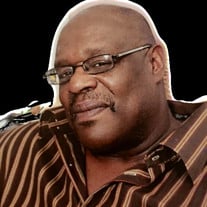 Kenneth Jones or ‘Kenny” by those close to him, was born April 29, 1960 in Chicago, Illinois to Dorothy Lee Vaughn and Leroy Wilds whom proceeded him in death. He departed from his family on Wednesday, June 3, 2020, after a brief battle with the COVID-19 virus. Memorial services will be held on Wednesday, June 10, 2020 at 6:00 p.m. To watch the live stream of the service, please use the Zoom ID: 6086804390. The Fratzke & Jensen Funeral Home in Storm Lake is in charge of the arrangements. Kenneth attended Wendell Phillips Academy High School in Chicago, Illinois where he played football. His high school friends gave him the nickname “Moon”; they said his head was shaped like a moon. Kenneth’s faith in God was very important to him. He was studying to become a Jehovah’s witness and took both the faith and teachings seriously. Kenneth was an ultimate sports fan. At any given time, you could catch him with an ice-cold beer watching any one of his favorite sporting events, the Chicago Bears, Chicago Bulls, Olympic sports, boxing, golf, tennis, NASCAR you name it he was a fan of it all. You could hear him a mile away shouting “c’mon man, come on” anytime his team was making bad plays, losing, or the referees made bad calls. He loved eating his favorite Chicago foods Italian beef sandwiches and the corned beef sandwiches from A.P. Deli. His favorite dish was a big bowl of his mother’s homemade chili with saltine crackers. Kenneth was especially proud of his children and loved them both dearly. He always bragged about his daughter Shanta’s intelligence and was overly protective of her. When she was a teenager he would say, “my daughter bet not have no boyfriend, bring him over here and see what happen.” He was a kinder gentler person when it came to Shanta. When she was a little girl, she wanted a Nintendo video game console for her birthday. At the time, the video game was extremely popular and hard to come by; Kenny searched all weekend and eventually found the video game system for his daughter. He was so happy and couldn’t wait to give it to her. Keon came many years later and was his partner in crime. Kenneth loved when he and Keon would dress up in their Sunday best to attend the Kingdom Hall meetings. Kenneth also played an important role in the lives of his stepchildren. Although, Kenneth kept steady work one of the things he really loved to do and excelled at, was painting. He was extremely meticulous about his work and was a perfectionist. His love for what he did reflected in all his projects. In the summer of 1992, he moved to Austin, Texas where he worked building manufactured homes with Palm Harbor for about 10 years then he went on to work for Motorola. In 2007, he moved to Storm Lake, IA where he began working for Tyson Meat Company. Not only did he find work in Storm Lake, IA but it was also where he met and married his wife Sara. Kenneth has always loved the bold styling and craftmanship of Cadillac cars. Any time he saw one on the road he’d stop, stare at the vehicle over his glasses in admiration. He finally got a Cadillac of his own and absolutely adored that car. He had a great sense of fashion and loved a nice suit. Kenny was always well dressed for his Kingdom Hall meetings. The friends at the congregation complemented him on his appearance all the time. We will remember Kenneth as a loving, kind, caring and all around wonderful human being, who made us all light up with his hilarious sense of humor. He had an enthusiasm for life and was loved by his many friends and family. Kenneth leaves to cherish his loving memory his beloved wife Sara Jones, daughter Shanta Jones, son Keon Jones, grandson Dakari Thomas, step-daughter Izabelle (Aaron) Ramos, step-sons Jason Kerr, Isaac Bryant, and Kaiden Peak, brother Leroy “Ricky” Wilds, nephews Carl Jones Jr., Carlton Williams, Isadore Brown, nieces Kim Reades, Latrice Candler, Carlina Jones-Brown; Shanta Jones's mother and long time friend, Sharon Colyer along with a host of close family members and friends. Kenneth was the youngest of three children. His brothers Carl and Samuel Jones preceded him in death. In addition to his parents and siblings he was preceded in death by his nephew Carlos Williams and great nephew Lamar Williams.

Kenneth Jones or &#8216;Kenny&#8221; by those close to him, was born April 29, 1960 in Chicago, Illinois to Dorothy Lee Vaughn and Leroy Wilds whom proceeded him in death. He departed from his family on Wednesday, June 3, 2020, after a brief... View Obituary & Service Information

The family of Kenneth Jones created this Life Tributes page to make it easy to share your memories.

Kenneth Jones or ‘Kenny” by those close to him, was born April...

Send flowers to the Jones family.