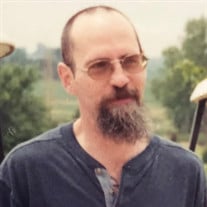 Kenneth Dodd, age 59, of Cherokee, Iowa died on Friday, March 1, 2019 at the Cherokee Specialty Care in Cherokee, Iowa. Memorial services will be held on Saturday, March 9, 2019 at 1:30 p.m. at the Fratzke & Jensen Funeral Home in Alta. Burial will be in the Woodlawn Cemetery in Alta at a later date. In lieu of flowers, memorials may be given to a charity of the donor’s choice in Kenny’s name. The Fratzke & Jensen Funeral in Alta is in charge of the arrangements. Kenneth F. Dodd was born December 9, 1959 in Windom, Minnesota. Kenneth attended Alta Community School and graduated in 1978. Prior to becoming ill, he worked at BilMar Foods, VT Industry and Tyson Foods. He remained in his home until October 2018, when he entered Cherokee Specialty Care at the time he was diagnosed with ALS. He passed away on March 1, 2019. He enjoyed woodworking, restoring and working on cars and motorcycles. He also enjoyed his pet bird, Alice. Kenneth is survived by his sons: Zachary of Cherokee, IA and Nathan of Sioux City; mother, Florence of Alta, IA; brothers: George (Shirley) of Sarcoxie, MO; Joe (Shirley) of Cherokee, IA; Glen (Deb) of Aurelia, IA; Gary (LaDonna) of Cleghorn, IA; sisters: Peggy Korleski of Aurelia, IA; Carol (Tommy) Langley of Weston, MO; Karen Bond of Gowrie, IA; Lora (David) Brosseau of Cedar Rapids, IA; Christine (Phil) Swim of O’Fallon, MO; many nieces, nephews and relatives. He was preceded in death by his father, George Dodd, Sr. and brother, William Dodd.

The family of Kenneth Dodd created this Life Tributes page to make it easy to share your memories.

Send flowers to the Dodd family.