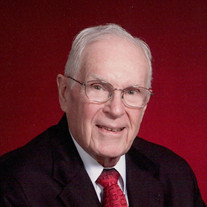 Keith Wilson Pierce died on October 20, 2019, at the age of 98. Memorial services will be held at a later date. The family asks that memorials be given to the: Keith & Virginia Pierce Music Endowment Fund at Buena Vista University: 610 W. 4th St. Storm Lake, Iowa 50588. The Fratzke & Jensen Funeral Home in Storm Lake is in charge of the arrangements. Keith was born on August 22, 1921, in Storm Lake, Iowa, to his parents, Howard A. and Lela Wilson Pierce. He attended the Storm Lake public schools, graduating from high school in 1938. He attended Buena Vista College from 1938 to 1940 and graduated from the University of California, Berkeley with a B.S. degree in physics and a certificate of optometry. After graduation, Keith returned to Storm Lake and joined his father in the practice of optometry. His first day at the office was on his twenty-first birthday, August 22, 1942. Almost 48 years later to the day, Keith retired on August 21, 1990. Keith was called into the service of his country on Memorial Day 1943 and was commissioned as an ensign in the United States Naval Reserve. He served in the Office of Procurement and Material in Chicago, Illinois, until his discharge at war’s end as a lieutenant. Keith married Virginia Mickelson on January 8, 1944. Keith and Ginny had three sons, Jeff, Tim and Michael, and reached a significant milestone earlier this year when they celebrated their 75th wedding anniversary. Keith enjoyed his career in optometry. He took pride in his profession and felt it important to get to know those whom he treated. In later years, he often remarked that he “didn’t have patients --- he had friends.” As a result of his long tenure, Keith frequently treated the second and third generations of patients he had originally seen as a young optometrist. During his life, Keith was actively involved and had leadership roles in many community and professional endeavors, including serving as a past master of the Masonic Lodge, chairman of the Buena Vista County Republican Central Committee, past president of the Iowa Optometric Association and a past trustee of the National Optometric Library Board. Keith was a life time member of Lakeside Presbyterian Chuck where he served as an elder. Keith had a longtime affiliation with Buena Vista University – as a student, a physics professor for a term in 1943 and as president of the BV Club. Keith and Ginny served as BVU Order of the Arch Co-Chairs in 2004 and received the Henry Olson Distinguished Service Award from the university in 2005. Keith was a charter member of Lake Creek Country Club. He loved to play golf and for many years enjoyed the comradery and competition of his weekly foursome. At age 69, he shot his age; and in his mid-80’s, he got his first (and only) hole in one. Keith was a devoted son, husband, father, grandfather and great-grandfather. He was proud of his family and its heritage and was a friend and mentor to many people over the course of his life. His survivors include sons Jeff Pierce (West Des Moines) and Michael K. (Margaret) Pierce (Houston, TX); daughter-in-law Laura Pierce (Tucson, AZ); grandchildren Allison (Kevin) Pinkowski (Kansas, City MO), Ryan (Heather) Pierce (Lincoln, NE); Martha (Eric) Davis (Tucson, AZ), Michael R. (Krissi) Pierce (Ankeny), Kathryn Pierce (Austin, TX) and Timothy M. Pierce (Houston, TX); great-grandchildren Emma Pinkowski, Samuel Pinkowski, Kaylee Pierce, Connor Pierce, Grace Davis, Henry Pierce and Claire Pierce; and niece and nephews Rosalie Pierce-Rhodes, Mark Pierce, Cynthia Pierce, Karen Sisler, Edwin Mickelson, James Mickelson, Gary Mickelson and Steve Mickelson. Keith was preceded in death by his parents, his wife Virginia, his son Tim E. Pierce and his brother Kelvin Pierce.

Keith Wilson Pierce died on October 20, 2019, at the age of 98. Memorial services will be held at a later date. The family asks that memorials be given to the: Keith & Virginia Pierce Music Endowment Fund at Buena Vista University: 610 W.... View Obituary & Service Information

The family of Keith Wilson Pierce created this Life Tributes page to make it easy to share your memories.

Send flowers to the Pierce family.