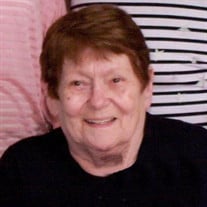 Karen Frances Hanson, age 84, of Storm Lake, Iowa and formerly of Wisconsin Rapids, Wisconsin and Port St. Joe, Florida, died at Methodist Manor Retirement Community on September 17, 2019. Private memorial services will be held by the family at a later date. The Fratzke & Jensen Funeral Home in Storm Lake is in charge of the arrangements. Karen was born December 11, 1934, in Wisconsin Rapids, Wisconsin, the daughter of Dr. Floyd Francis and Viola (U’Del) Firnstahl. She attended school in Wisconsin Rapids where she graduated in 1952. Karen married James Gellerman in January 1954 and this marriage was blessed with a son and daughter, Douglas and Kyle. She later married Michael Krcmar and this marriage was blessed with two daughters, Debra and Melissa. Karen later married Jack Hanson and they traveled around the United States in an RV during their retirement years until they settled down in Port St. Joe, Florida. Karen loved playing and watching the game of golf. She was an avid Green Bay Packers fan which you could certainly see when you entered her room at the Manor. She always had a smart comment for anyone daring to give her a hard time about “her beloved Packers!” She never failed to offer her sympathy to anyone who wasn’t a Packer fan. Karen very much enjoyed all of the employees and her friends she made at the Manor and participating in the many activities offered there. You could always find her working on a jigsaw puzzle and she especially looked forward to her Friday nights spent with her daughter, Kyle, where many times they would work on a puzzle until late into the night. Those left to cherish her memory include her children: Douglas Gellerman of Ruthven, Iowa; Kyle (John) Cejka of Storm Lake, Iowa; Debra (Michael) Ausloos of Denmark, Wisconsin; and, Melissa (John) Mikoda of Hartland, Wisconsin; eleven grandchildren; thirteen great grandchildren; two great-great-grandchildren; and, one sister, Pamela Axness. Karen was preceded in death by her parents. GO PACK GO!!!

The family of Karen Hanson created this Life Tributes page to make it easy to share your memories.

Send flowers to the Hanson family.