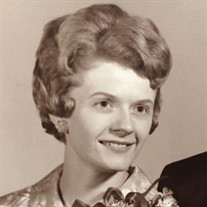 JoAnn Stanton, age 84, of Laurel, Nebraska formerly of Alta, Iowa died on Monday, December 24, 2018 in Wayne, Nebraska. Funeral services will be held on Saturday, December 29, 2018 at 3:00 p.m. at the Fratzke & Jensen Funeral Home in ALTA. Burial will be in the Woodlawn Cemetery in Alta. Visitation will take place one hour prior to the service at the funeral home. The Fratzke & Jensen Funeral Home in Alta is in charge of the arrangements. JoAnn Hansen was born July 7, 1934 in Alta, Iowa, the daughter of Alvin and Helen (Larson) Hansen. Growing up, she attended rural schools prior to graduating from Alta High School in 1952. On November 30, 1963, JoAnn was united in marriage to Glenn Stanton in Jackson, Minnesota. Together, they were blessed with one son, Scott Stanton. The couple eventually moved back to Iowa. Throughout her working career, JoAnn was a telephone operator. She was a member of the Telephone Pioneers in the state of Iowa. She presided with her husband as President of the Iowa Square and Round Dance Federation, she was also president of the Sunnyside School PTA and women’s circle at Morningside Lutheran Church. JoAnn was raised in the Lutheran faith and was a long-time member of the Morningside Lutheran Church in Sioux City. In her free time, she enjoyed traveling and playing cards with many friends. She was known for decorating every room of her home for Christmas and was very proud of her Swedish heritage. Those left to cherish her memory include her son, Scott (Judith) Stanton of Laurel, Nebraska; grandchildren: Justin, Austin, and Kaitlin Stanton; Jason and Aaron Kent; niece, Shelley (Denny) Koopman of Alta, Iowa; nephew, Gary (Deb) Demers of Sioux City, Iowa; stepson, Daniel Stanton of Colorado; extended family and friends. JoAnn was preceded in death by her parents; husband, Glenn Stanton; infant daughter, Nancy; son, Douglas Kent; and sisters: Phyllis and Jeanette.

The family of JoAnn (Kirby) Stanton created this Life Tributes page to make it easy to share your memories.

Send flowers to the Stanton family.