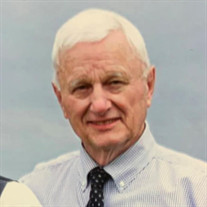 Jim Treat, age 85, of Storm Lake, Iowa died on Sunday, March 22, 2020 at the Buena Vista Regional Medical Center in Storm Lake. Private family graveside service will be held on Saturday, April 11, 2020 at the Storm Lake Cemetery. In lieu of flowers, the family requests memorials be given to the Buena Vista Rifle and Pistol Club Youth Program, P.O. Box 852 Storm Lake, Iowa 50588 or to UnityPoint Hospice, 214 South 25th St. Fort Dodge, IA 50501. The Fratzke & Jensen Funeral Home in Storm Lake is in charge of the arrangements. James Carlisle Treat was born January 28, 1935, in New Hampton, Iowa, the son of Melvin “Sonny” and Doris (Sjobakken) Treat. After graduating from New Hampton High School in 1953, he served in the Army for two years. He graduated from Upper Iowa University in 1963 and taught and coached in the Starmont Community School until 1965. In the summers he went on to get his master’s degree at Colorado State University. From 1965 to 1970 he taught and coached at Maquoketa, Iowa. Since 1970, he has lived in Storm Lake, Iowa, serving as Vice Principal and Athletic Director at the High School, until retirement in 1997. Following retirement, he drove school bus for 18 years. On June 6, 1959, Jim married Roma Schlesselman in Aurora, Iowa. They were blessed with two children: Todd and Traci and have celebrated 60 years of marriage together. Jim was a faithful member of the Storm Lake Independent Baptist Church. God, Family, and Country were very important to him, and he let his voice be heard at Patriotic events and in the many Editorials he wrote over the years. He served on the City Council from 1998 to 2009 and was well known for being unafraid to stand up for his beliefs. Besides having a great love for his family, he thoroughly enjoyed hunting, fishing, and trap shooting, and was happiest when outdoors instructing and enjoying these things with his children and grandchildren. The annual turkey hunting trips were always one of his favorite times, with pheasant hunting being a close second. He liked to be “on the go” and in his later years enjoyed spending time with the “coffee boys” at Hardees. Those left to cherish his memory include his wife, Roma, his two children: Todd (Janet) Treat of Andrew, Iowa; Traci (Derek) Wharton of Indianola, Iowa; grandchildren: Tucker (Mikayla) Wharton of Milo, Iowa; Molly (fiancé, Kirk Hudson) Wharton of Des Moines, Iowa; twins, Tanner and Trevor Wharton of Des Moines, Iowa; step grandchildren: Jadyn (Kara) Root of Ankeny, Iowa; Jordyn (Chad) St. John of Fort Dodge, Iowa; step great grandchildren: Kasyn and Karver St. John of Fort Dodge, Iowa; sister, Connie DeVries of Louisville, Kentucky; brother-in-law, Gene (Esther) Tonn of Lady Lake, Florida; five nephews, two nieces, extended family and many friends. Jim was preceded in death by his parents; his stepfather, Ray Bartz; brother-in-law and sister-in-law, Philip and Phyllis Schlesselman; brother-in-law, Bob DeVries; sister-in-law, Jane Tonn; and nephew, Jerry Schlesselman.

The family of Jim Treat created this Life Tributes page to make it easy to share your memories.

Send flowers to the Treat family.