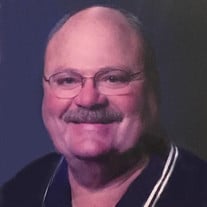 Jim Bisenius, age 69, of Schaller, Iowa died on Monday, January 21, 2019 at St. Luke's Regional Medical Center in Sioux City, Iowa. Memorial Mass will be held on Saturday, January 26, 2019 at 10:30 a.m. at St. Joseph Catholic Church in Schaller. Burial will be in the Schaller Cemetery in Schaller. Visitation will take place on Friday, January 25, 2019 from 5:00-7:00 p.m. at the SCHALLER GYM in Schaller. The Fratzke & Jensen Funeral Home in Schaller is in charge of arrangements. James Joseph Bisenius was born in Emmetsburg, Iowa on April 29, 1949. Jim was preceeded in death by his parents: J.W. Bisenius and Lois (Leuer) Bisenius. He is survived by his wife Marthajane (Schill) Bisenius Schaller, IA; Daughter Marjorie (Dennis) Omaha, NE; Son Adam (Amy) Holstein, IA; Daughter Molly (Terry) Odebolt, IA. Grandchildren: Jasmin, Junior, Jacob, Brody, Brock, Brayden, Erin, Ella, Ben, Kara and Brooklyn. Jim was born and raised in Emmetsurg, IA. He graduated from Emmetsburg Catholic High School in 1967. He attended Buena Vista College in Storm Lake, Iowa and graduated in 1971. Upon graduating BV, he moved to Schaller to teach and coach. Jim and Jane, both students at BV, were married August 6, 1971. Jim taught and coached all ages over several decades in the Schaller and Schaller-Crestland School Systems. Fondly known as Mr. B, Coach B, Buzz or Jim, he started as little league baseball coach for Tri-County, high school football, basketball and track for many years. He then moved to Junior High football, basketball and track. The years coaching high school football with his dear friend Jim Taylor were some of his favorite years. Mr. B believed strongly in education and second chances and tutored and mentored kids of all ages—formally and informally. Jim moved on from teaching to sell insurance and real estate full time. But his coaching and mentoring would continue. Eventually when health reasons confined him to a wheelchair, he made the difficult decision to retire from formal coaching at that point. However, his passion for kids, sports and young people kept him continuing to coach and mentor his entire lifetime—long past the formality of the official title. That was in his blood. That was his purpose. Mr. B was very active in the St. Joseph Catholic church and the Schaller community. He taught CCD classes for the high school students; served on the Catholic Church Board, Schaller City Council and Schaller Chamber for several years. He loved Schaller and the people in it and would always advocate and support the small business owners. Jim loved to golf, take kids fishing and go camping. A lifetime of memories were made camping and fishing with family and friends at various places. He enjoyed all sports but he loved football the most. Jim was a lifelong Buena Vista Beaver supporter and never missed a home game for 50 years. He loved attending his kids’ school events and watching his son, nephews and neighbor play football at BVU. The years his son, Adam, spent coaching at BV were very special to him. If he wasn’t watching BVU, he would be watching the Iowa Hawkeyes on Saturdays and Minnesota Vikings on Sundays. Jim was a loving husband , a devoted and encouraging dad to 3, an amazing grandpa to 11 and a true friend, confidante, mentor, teacher and coach to hundreds.

The family of Jim Bisenius created this Life Tributes page to make it easy to share your memories.

Send flowers to the Bisenius family.