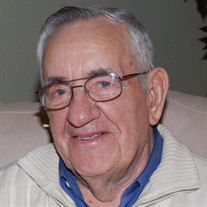 Jerome "Fritz" Schramm, age 91, of Early, Iowa died on Sunday, August 2, 2020 at his home in Early. Private Funeral Mass will take place on Saturday, August 8, 2020 at 12:00 p.m. at the Sacred Heart Catholic Church in Early. To watch the live stream of the funeral, please use the link https://us02web.zoom.us/j/81677570988. Friends are welcome to gather with the family at the committal service in the church cemetery following the mass. Public visitation with social distancing encouraged will be held on Friday, August 7, 2020 from 5:00-8:00 p.m. with a vigil service at 7:15 p.m. and a virtual KC Rosary at 7:30 p.m. all at the Fratzke & Jensen Funeral Home in STORM LAKE. The Fratzke & Jensen Funeral Home in Storm Lake is in charge of the arrangements. Jerome “Fritz” William Schramm, the son of Gustov and Gertrude (Henrich) Schramm, was born on September 7, 1928 in Odebolt, Iowa. As an infant, he was baptized at St. Martin’s Catholic Church in Odebolt and later confirmed at the same church. His education was varied as he attended country school his first 2 years before moving to St. Martin’s Catholic School for grades 3-7, then completing his elementary education at Sacred Heart Catholic School in Early. It was here that he met the love of his life, Ramona Jean Gard. Continuing on at Early High School he excelled in sports, especially basketball, and earned his high school diploma in 1946. Advice from his mother was “you should never get married until you are at least 20”, so on September 9, 1948 (2 days after turning 20), Jerome and Ramona were married at the Sacred Heart Catholic Church in Early. The couple was blessed with five children: Karen, Joyce, Gary, Mary Jo, and Jean. Jerome was a long-time member of Sacred Heart Church where he served on the finance board and was an usher. He was also active in the St. Mary’s Booster Club and a 4th Degree Knight for the Knights of Columbus. As well as serving his church, Fritz served his community by participating on the REC Board. Although Jerome had the reputation of being one of the hardest working men around (farming, milking cows, and shelling corn) he still found time to LIVE life. In his free time, you would find him playing cards, playing softball, bowling, fishing as well as selling seed corn. It was the interactions with others that added much value to his life. Upon meeting “Fritz”, one could not help but notice he had extremely large hands; however, they soon came to realize his heart was just as large. He would do anything for anyone and was always open to helping those in need. Above all, he cherished the time spent with his family and was thankful for all the blessings he had been given. Those who will miss him dearly include his wife of 71 years, Ramona (Gard) Schramm of Early, Iowa; children: Karen Cusick of Lake St. Louis, Missouri; Joyce Schramm (Steve) Moss of Anchorage, Alaska; Gary (Nancy) Schramm of Early, Iowa; Mary Jo (Larry) Dellwo of Early, Iowa; Jean (Larry) Walker of Cherokee, Iowa; grandchildren: Christie (Michael) Haynes; Kevin (Erin) Cusick; Christina (Michael) Taylor; Stevie (Liana) Moss; Andre (Roxanna) Moss; Nikki Moss; Courtnee (Derrick) VanOrd; McKenzie (Chris) Lallish; Nathan (Elizabeth) Schramm; Valerie Schramm; Stephanie Schramm; Joe (Sherae) Dellwo; Tom (Janelle) Dellwo; Alison (Chris) Evangelisti; Emily (Justin) Gutzmann; Justin (Julia) Walker; Jason (Juli) Walker; Brandon Walker; Brett (Abigail) Walker; 35 great grandchildren; extended family and friends. When his heart could beat no longer, he flew “On Eagles Wings” to join God and those who had preceded him in death. Those include his parents, brothers, Robert and Donald Schramm; sisters, Delores Determan and Betty Lou Schramm (infant); parents-in-law, Albert and Kathryn Gard; brothers-in-law, Joe Determan and Bill Nielsen; sisters-in-law, MaryAnn Gard and Ruth Schramm and son-in-law, Ray Cusick.

Jerome "Fritz" Schramm, age 91, of Early, Iowa died on Sunday, August 2, 2020 at his home in Early. Private Funeral Mass will take place on Saturday, August 8, 2020 at 12:00 p.m. at the Sacred Heart Catholic Church in Early. To watch the live... View Obituary & Service Information

The family of Jerome "Fritz" Schramm created this Life Tributes page to make it easy to share your memories.

Send flowers to the Schramm family.