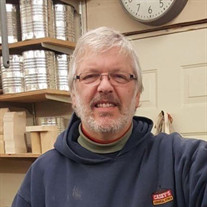 Jeff Bunjes, age 71, of Alta, Iowa went to be with the Lord December 3, 2021 in Alta, Iowa. Funeral services will take place Thursday, December 9, 2021, at 10:30 am at Summit Evangelical Free Church in Alta. Burial will be in the Woodlawn Cemetery with full military honors. Visitation will take place Wednesday, December 8, 2021 at Summit Evangelical Free Church from 5:00 pm - 7:00 pm. The Fratzke & Jensen Funeral Home in Alta is in charge of the arrangements. Jeffrey Heino Bunjes was born on March 20, 1950, the son of Heino and Margaret (Frasch) Bunjes, in LeMars, Iowa. He attended school in LeMars, graduating from LeMars Central in 1968. Furthering his education at WITCC, Jeff earned a degree in Heating/Air Conditioning/Refrigeration. Jeff first worked at Scott’s Refrigeration in Storm Lake for 15 years and later for Casey’s Convenience Stores for over 32 years retiring in July 2021. From January 16, 1969 to December 18, 1972, Jeff served his country in the U.S. Navy during the Vietnam War. During this time, he was awarded the National Defense Medal, Vietnam Service Medal and the Vietnam Campaign Medal. On September 27, 1975, Jeff was united in marriage to Carol Petersen in LeMars. This union was blessed with two sons, Wesley and Bradley. Over the years, Jeff was a diligent and creative wood worker. He created many wood carvings and did wood working in many capacities. He was a former member of the volunteer Storm Lake Fire Department and enjoyed fishing, playing guitar, photography and dancing. Much pride and enjoyment were experienced as he proudly watched his children and grandkids in their many activities in school, church and around the community. Additionally, Jeff had created many strong connections and meaningful relationships with his church family, where he cherished the moments they shared in worship at Summit as well as being involved in Timothy Team. As life progressed, Jeff became more immersed in his faith and spent many hours searching scriptures. Those left to cherish Jeff are his wife, Carol of Alta; two sons: Wes (Kirstie) Bunjes and Brad (Julie) Bunjes, all of Alta; grandchildren: Blair, Grahm, Cade, Braycen, Kinzley and Josie; one sister, Cindy (Kenny) Krienert of Brunsville, Iowa; brother-in-law, Roger (Rosie) Petersen of Merrilll, Iowa; sisters-in-law: Charlotte (Jeff) Langel of Okoboji, Iowa, and Connie (Bill) Klohs of LeMars; extended family and many friends. Preceding him in death were his parents, Heino and Margaret Bunjes; brother, Steve Bunjes; parents-in-law, Darvin and Jane Petersen; and brother-in-law, Ed Wagner.

Jeff Bunjes, age 71, of Alta, Iowa went to be with the Lord December 3, 2021 in Alta, Iowa. Funeral services will take place Thursday, December 9, 2021, at 10:30 am at Summit Evangelical Free Church in Alta. Burial will be in the Woodlawn Cemetery... View Obituary & Service Information

The family of Jeff H. Bunjes created this Life Tributes page to make it easy to share your memories.

Jeff Bunjes, age 71, of Alta, Iowa went to be with the Lord December...

Send flowers to the Bunjes family.