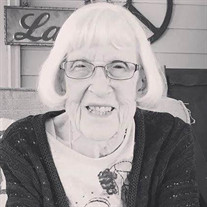 Jean Bridson, age 95, of Storm Lake, Iowa died on Saturday, June 15, 2019 at the Methodist Manor Retirement Community in Storm Lake. Funeral services will be held on Saturday, June 22, 2019 at 11:00 a.m. at the United Methodist Church in Storm Lake. Burial will be in the Fairview Cemetery in Terril. Visitation will take place one hour prior to the service at the CHURCH. The Fratzke & Jensen Funeral Home in Storm Lake is in charge of the arrangements. Leaila Jean Bridson, the daughter of Enos and Bess (Shaffar) Fairchild, was born on September 21, 1923 in Rembrandt, Iowa. Jean was baptized and confirmed in the Methodist faith. Growing up, Jean was raised in Terril where she attended grade school and high school. After graduating from Terril High School in 1941, Jean attended AIB in Des Moines. While in Des Moines attending school, she worked at a law office. She worked for a short time at a bank in Spencer. Then she worked until her retirement serving as cashier from 1943-1947 at the State Bank of Terril. She did an amazing job at balancing work and raising a family. On February 25, 1945, Jean was united in marriage to Erwin Bridson. The couple married during WW2 and honeymooned in California before Erwin returned to active duty in the Navy. In 1982, Jean and Erwin moved to Storm Lake to be closer to their grandchildren. In the mid-80’s Erwin’s health declined, needing dialysis for failing kidneys. After training in Iowa City, they spent 9 years doing in-home dialysis in their home at Storm Lake. She loved growing roses, piano music and occasionally would break out in a tap-dance. Jean kept herself current in politics, news & weather daily. She was a proud democrat. Most of all she loved & dedicated herself to her granddaughters and great-grandsons. Those left to cherish her memory include her siblings: Mary Lou Plautz, Estel Fairchild, and Phyllis (Keith) Bridson; daughter, Deboney (Richard) Langner; grandchildren: Melanie (Justin) Langner Yarosevich and Kayleen (Kevin) Jensen; great-grandchildren: Joseph and Benjamin Langner Yarosevich; Owen and Elijah Jensen; many dear nieces and nephews; double cousins (Jean and Phyllis married brothers, Erwin and Keith Bridson); and extended family and friends. Jean was preceded in death by her parents, Enos and Bess (Schaffar) Fairchild; daughter, Pam Bridson; husband, Erwin Bridson; and brothers, Robert and Dan Fairchild.

The family of Jean Bridson created this Life Tributes page to make it easy to share your memories.

Send flowers to the Bridson family.