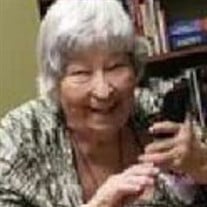 Janet Rosenbrook, age 86, of Alta, Iowa died on Thursday, March 5, 2020 in Storm Lake. Funeral services will be held on Tuesday, March 10, 2020 at 10:30 a.m. at Summit Evangelical Free Church in Alta, Iowa. Burial will be in the Storm Lake Cemetery. Visitation will take place on Monday, March 9, 2020 from 5:00-8:00 p.m. at the Fratzke & Jensen Funeral Home in STORM LAKE. The Fratzke & Jensen Funeral Home in Storm Lake is in charge of the arrangements. Janet Rae Haglund, the daughter of Raymond and Mable (Runyan) Haglund was born at Boone, Iowa, on February 14, 1934. She was baptized at the First Christian Church in Boone. Janet began her education at the Hickory Grove country school and completed her education at Ogden, Iowa where she was a graduate of the Ogden High School. On August 4, 1963, Janet was united in marriage to Robert Rosenbrook at the First Christian Church in Boone. This union was joined by Robert’s daughter, Teresa. Most of Janet and Robert’s married lifetime was spent in the Storm Lake community. For 18 year, Janet served at the Buena Vista County Deputy Treasurer. During Janet and Bob’s “retirement years” they operated the Super Wash car wash in Storm Lake. In 2000, Janet and Robert moved to their acreage south of Alta. Janet and Bob had been members of SERPACI car club. They loved camping, spending time at Cutty’s, and vacationing throughout the United States. Janet’s love for her family was a very important part of her life. She enjoyed attending Teresa’s activities while she was growing up and that has continued on to her grandchildren and great grandchildren. It was a great joy of hers to attend all of their activities and sporting events. Everyone who knew Janet was impacted by her faith in her Lord and Savior Jesus Christ. Throughout her lifetime, she was very committed to the churches she attended and over the years enjoyed sharing her musical talents on the organ and piano. Janet was very faithful in reading her Bible and read through the Bible (in one year) many times. Janet was currently a member of the Summit Evangelical Free Church. Janet’s life will always be loved and her cherished by her family which include her daughter and son-in-law: Teresa and David Johnson of Ida Grove, Iowa, her grandchildren: Jeremy (Traci) Johnson and their five children, Elizabeth and Brent Beukema and their son, Joshua, Jared (Anastasia) Johnson and their three children, Erin Johnson, Jacob (Melissa) Johnson and their two children, two sisters-in-law; nieces, nephews, other extended family and friends. She was preceded in death by her parents, her husband, Robert, and one brother.

Janet Rosenbrook, age 86, of Alta, Iowa died on Thursday, March 5, 2020 in Storm Lake. Funeral services will be held on Tuesday, March 10, 2020 at 10:30 a.m. at Summit Evangelical Free Church in Alta, Iowa. Burial will be in the Storm Lake... View Obituary & Service Information

The family of Janet Rosenbrook created this Life Tributes page to make it easy to share your memories.

Send flowers to the Rosenbrook family.