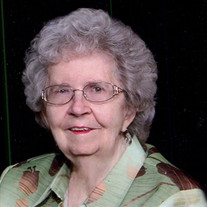 Janet Haraldson, age 91, of Rembrandt, Iowa died Friday, April 5, 2019 in Spencer, Iowa. Funeral services will take place Tuesday, April 9, 2019 at 10:30 a.m. at Our Savior’s Lutheran Church in Rembrandt. Burial will be in the Little Sioux Valley Cemetery. Visitation will take place Monday, April 8, 2019 from 5-7:00 p.m. at the Fratzke & Jensen Funeral Home in Storm Lake. In lieu of flowers, memorials may be directed to the Rembrandt Youth Ball Park. The Fratzke & Jensen Funeral Home in Storm Lake is in charge of the arrangements. Janet Haraldson was born on February 26, 1928, in Austin, Minnesota, the third child of Joy and Margaret (Avery) Dunning, following brothers Robert and Alden into this world. She was baptized in the First Congregational Church in Spencer, Iowa, on November 3, 1929. “Mother Margaret” died way too young in February, 1931, and in December, 1932, Janet gained two more brothers, Vic and Connie, when Joy married Maurine Christenson, who had also been widowed, and a tight family unit was created. Janet worked for Joe and Marge Carroll in the early years of Carroll’s Bakery in Spencer while going to school, graduating with the SHS Class of 1946. In September of 1947, her parents bought the café in Rembrandt, Iowa. One day when there was a big crowd expected for a farm auction they called Janet to come down and help, and she basically never left. She continued to help at Dunning’s Cafe, met a local boy, Ronald Haraldson, and she and “Ronnie” were married on August 23, 1950 in Jackson, Minnesota. To this union four children were born: Vaughan, Valerie, James and David. The new couple soon moved to San Antonio, Texas, where Ron spent four years in the service as a hospital clerk at Lackland Air Force Base during the Korean Conflict. After his Honorable Discharge in December, 1954, they moved back to Rembrandt where Ron joined his father working in the First National Bank of Rembrandt. In addition to raising her kids, Janet jumped into community activities with both feet. She had roles in community theatre plays, supported school events and joined the Merry Matrons ladies’ group. She was very active in Our Saviors Lutheran Church: getting confirmed in the adult class of 1957; organizing Christmas programs, Vacation Bible School, and Mother-Daughter Banquets; participating in WELCA, and helping host the community Halloween party in the church basement. For many, many years, Janet was a fixture in the church kitchen every time there was food to be served for any occasion. Janet was on the founding board of the Rembrandt Housing Project and oversaw that facility’s upkeep for many years. She was instrumental in preserving copies of The Rembrandt Booster, helping with the Rembrandt alumni reunion activities and making sure that Rembrandt was well-represented in the displays at the Buena Vista County Historical Society in Storm Lake. When her nest at home was almost empty, Janet joined her husband at the bank, working beside him there for nearly 4 decades until her retirement in 2010. After the new Little League ballpark at the east edge of Rembrandt---Engebretson Field----was dedicated in 1988, she managed the concession stand, turning it into a destination eatery with her fabled baked potatoes and 9 possible toppings, for which she earned the title “The Baked Potato Queen.” Janet was proud that she had no middle name--- like the last five women in the lineage before her---a tradition that was carried down to her daughter and granddaughter. A lifelong patriot, she traced her Avery family roots back to New England before the Revolutionary War. She had revered her older brother, Robert, who joined the Army in 1943 after graduating from Spencer High School. “Bob” officially entered WW II when he walked ashore Utah Beach shortly after D-Day. His family back home was devastated by the news that he had been killed in action on July 3, 1944. Janet honored his memory by not only observing proper flag etiquette, but making sure that other people did, too. A pet peeve of hers was to see a tattered flag being flown, and she frequently gave people new flags to replace their old, worn out ones. Every Memorial Day weekend, Janet and Ronnie loaded their van with crosses, drove to the Little Sioux Valley Cemetery west of Rembrandt, and decorated the graves of every veteran buried there. Fittingly, in 2005, Janet found closure when she was able to visit Bob’s grave at the American Cemetery in Normandy. Janet was a bubbling fountain of energy and good humor--- she lived her life with a smile and a contagious laugh. And she literally could not sit still. She always had a project in progress with yet more waiting to be started, usually to help someone else. Janet was preceded in death by her husband of 68 years; her mother, father and step-mother; and her four brothers. She is survived by sons Vaughan, Jim (Jerri) and David of Rembrandt, daughter Valerie Mosbo (Rolf) of Spencer, grandchildren Stefanie Mosbo Henning (Nate Conlon) of Spencer, Justin Mosbo (Jane) of Charlotte, NC, Michael Haraldson of Spencer, Jennifer Haraldson of Minneapolis, MN, and great-grandsons Jackson Mosbo and Jordan Mosbo.

The family of Janet Haraldson created this Life Tributes page to make it easy to share your memories.

Send flowers to the Haraldson family.