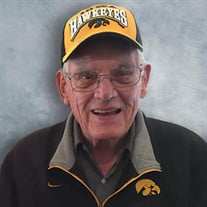 James Louis "Jim" Reese, age 95, of Storm Lake, Iowa passed away on September 17, 2021 in Stevens Point. Funeral services will take place Wednesday, September 22, 2021 at 2:00 p.m. at the United Methodist Church in Storm Lake. Burial will be in the Buena Vista Memorial Park Cemetery in Storm Lake. Visitation will take place one hour prior to the services at the CHURCH. In lieu of flowers, the family would like to designate a live tree memorial in various Storm Lake locations dear to Jim. Memorials will also be directed to the United Methodist Church food distribution program: 211 East 3rd St. Storm Lake, IA 50588 and Genesis Development Center: 1607 North Lake Ave. Storm Lake, IA 50588. The Fratzke & Jensen Funeral Home in Storm Lake is in charge of the arrangements. On December 19, 1925, Jim was the first born of three children to Thomas and Marie (Ryan) Reese in Sioux City, Iowa. He grew up in Larchwood, Iowa where he attended school before moving to Storm Lake Iowa in 1943 for his senior year. After graduation Jim was inducted into the Army on June 6, 1944 and served in Italy during WWII. In the fall of 1946, he enrolled in Buena Vista College and in January of 1947 took a job with the Storm Lake Post Office. Although Jim had his sights set on becoming a high school coach, the opportunity for full employment for the postal service was too good to pass up. He was called back into the service in the fall of 1950 and served in Korea for a year. Jim then returned to the Post Office where he served as a letter carrier, clerk, and Supervisor of Postal Operations until he retired in September of 1983. Retirement however, wasn’t in the cards for long; he needed something to do. Jim became a salesman for Wick Buildings working through Taylor Contracting in May of 1984 until his second retirement 27 years later in February of 2011. Jim met Elaine Weimer at a dance in Storm Lake at the Cobblestone Inn in 1945. They could really cut a rug! They married on June 22, 1947 at the Storm Lake Methodist Church. In 1954 Jim saw an ad for US Homes out of Des Moines in the Sears and Roebuck catalog. After the birth of their 3rd child, Jim and Elaine bought a lot on Renshaw Drive, hired a local contractor and built the house that would become their home for 64 years. In 1956 with a 6 year old boy at home, Jim thought Storm Lake needed some kind of youth baseball program. He approached the Community Chest board and secured $500 to start a program for 8 teams of 10-12 year olds. By year three, Jim had expanded the program to include 8-9 and 13-15 year olds for a total of 375 Storm Lake ballplayers. They each paid $1 to join which covered insurance. Local organizations including Hy-Noon, Beaver Kiwanis, Rotary, Elks Club, Fire Department, Amvets and Lions were contacted and convinced to donate $100 per year for a uniform fund. East Field at East Elementary School was the original home for youth baseball and continues to be used to this day with a plaque in Jim’s honor as Little League President 1956-1987. Jim spent untold hours each spring and summer organizing teams, umpires, and announcers, as well as dragging and liming the fields for the boys to play ball. In 1951 Jim began officiating high school football and basketball not only for his interest in sports but more importantly to supplement the family income. He was a referee for 20 years including girls’ basketball which was half court at the time. On a Friday night during the halftime of a class 3-A state tournament championship game, Jim was inducted into the Official’s Hall of Fame in Des Moines, IA. It was a proud moment for the whole family. Jim was an avid golfer and was a very proud charter member of Lake Creek Country Club. When loading the car for any trip, the clubs went in the trunk first. Jim enjoyed following the Buena Vista Beavers, Chicago Cubs, and Iowa Hawkeyes. He also worked in the Press Box at Buena Vista College for 30 years and enjoyed coffee with the guys at Sportsman’s Monday-Friday before opening. They had a key. Jim and Elaine enjoyed vacationing in Florida in the winter. Through Wick buildings and Taylor Contracting they enjoyed traveling to Jamaica, Disney World, Nashville, Cancun, and the Bahamas. They also loved to play cards, (bridge and pitch), and go out dancing at The Cobblestone. Jim was a husband, dad, and grandpa first and foremost with a kind, generous and loving heart. He had a wonderful sense of humor and loved to laugh. His optimism and glass half full attitude was contagious. Growing up in the great depression instilled a work ethic that would steer many life decisions. Work hard, take care of your family, support your friends and neighbors, and promote your community. Jim truly loved Storm Lake, his little slice of heaven. Jim is survived by his children Scott (Lynna) Reese, Sandra Davis, Patricia Rogers, 11 grandchildren, 12 great-children. He is preceded in death by his parents, brother Richard (Dick) Reese, sister Mary Ann (Reese) Harris and his wife of 72 years Elaine Marie (Weimer) Reese.

The family of James Reese created this Life Tributes page to make it easy to share your memories.

Send flowers to the Reese family.