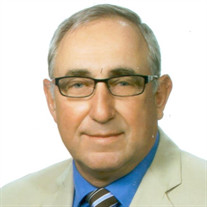 Jim Ehlers, age 69, of Newell, Iowa died on Tuesday, October 2, 2018 at the Methodist Manor Retirement Community in Storm Lake after a four-year long battle with Parkinson’s Disease Funeral services will be held on Saturday, October 6, 2018 at 10:30 a.m. at the Evangelical Free Church in Albert City, Iowa. Burial will be in the Buena Vista Memorial Park Cemetery in Storm Lake. Visitation will take place on Friday, October 5, 2018 from 5:00-8:00 p.m. at the Fratzke & Jensen Funeral Home in STORM LAKE. The Fratzke & Jensen Funeral Home in Storm Lake is in charge of the arrangements. James “Jim” Henry Ehlers, the son of Helmuth and Rosella (Gerdes) Ehlers, was born on December 12, 1948 in Storm Lake. In his youth, Jim attended grade school at Zion Lutheran and graduated high school in 1967 from Albert City-Truesdale. Jim furthered his education after high school by attending Iowa State where he earned an Ag degree in Farming Operations in 1971. Jim enlisted in the Army National Guard in January of 1969. He would serve his country for six years before being honorably discharged in 1975. Jim loved his country and was proud to serve. On September 2, 1972, Jim was united in marriage to Gwenn Sather in Franklin, Minnesota. The couple was blessed with three children: Sonya Lynn, Joel James, and Emily Pauline. Jim was very active in his community and in his church. Jim received a Believer’s Baptism at a pool through the Evangelical Free Church in Albert City. He served his church through teaching Sunday School, serving as a Deacon, church chairman, and as an Elder. In his community, Jim was an Albert City Legion member and a member of Farm Credit Services of America Board of Directors from 2009-2017. In his free time, Jim enjoyed being on the lake, taking motorcycle trips to Colorado, the Black Hills, and traveling with Gwenn to Hawaii and Mexico where he enjoyed seeing God’s beauty. Above all, Jim loved spending time with his family and going to his children’s activities. Those left to cherish his memory include his wife of 46 years, Gwenn of Newell, Iowa; children: Sonya (Jeff) Veverka of Overland Park, Kansas; Joel (Brooke) Ehlers of Albert City, Iowa; Emily (Justin) Rethmeyer of Kansas City, Missouri; brother, Steve (Betty) Ehlers of Newell, Iowa; sister, Judi Hubbard of Seattle, Washington; grandchildren: Joseph James and Jackson Henry Veverka; Emma Elizabeth Ehlers; Madelyn Pauline Rethmeyer; extended family and friends. Jim was preceded in death by his parents Helmuth and Rosella; parents-in-law, Victor and Adelle Sather; and nephew, Joshua Ehlers.

The family of James "Jim" Ehlers created this Life Tributes page to make it easy to share your memories.

Send flowers to the Ehlers family.